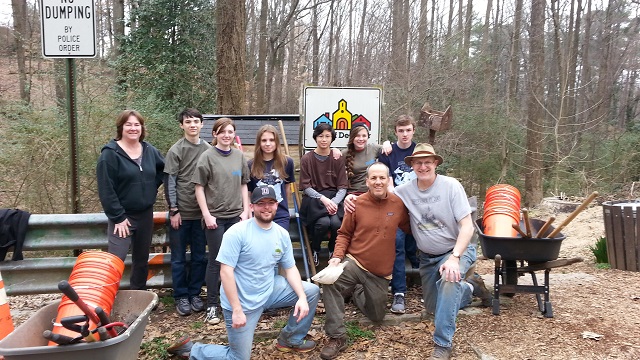 A photo from the March 1 service project, courtesy of Chris Billingsley
Share

A photo from the March 1 service project, courtesy of Chris Billingsley

Chris Billingsley is a retied Decatur High teacher, but he’s still involved with the school and its students.

He sent along some notes about the Decatur High Close Up Club’s recent service project. Students in the club on March 1 held a “March Into Spring” work day at the Glenn Creek Nature Preserve.

“As part of the club’s service requirement, students volunteered at the nature preserve pulling invasive plants and spreading mulch on the trails,” Billingsley said.

The effort brought together Billingsley and another vocal member of the community, Catherine Fox. Fox has been one of the lead voices behind a push to strengthen the city’s tree ordinance. Billingsley was one of the most vocal opponents of the first draft of the ordinance. But the two Decatur residents did not let that stop them from teaming up to help DHS kids with their service project.

During their trip the students plan to honor soldiers from Decatur and DeKalb County killed during World War I, Billingsley said.

“If you would like to make a contribution to the DHS Close Up trip, or help pay for the memorial wreath, please contact Mr. Chris Curtis at [email protected],” Billingsley said.

He also added, “On a personal note, I would like to point out that Decatur citizens, with very diverse views concerning public policy, can work together in a way that builds mutual respect and understanding.”