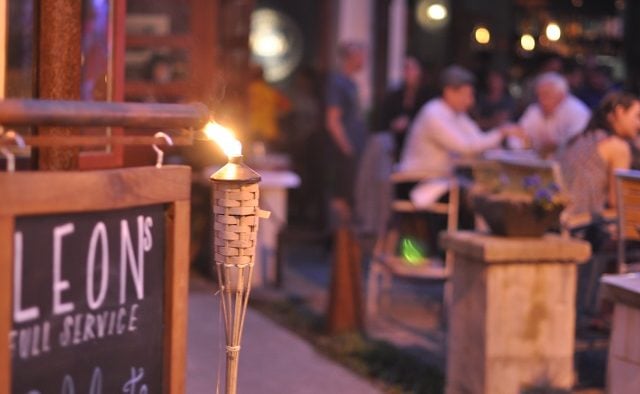 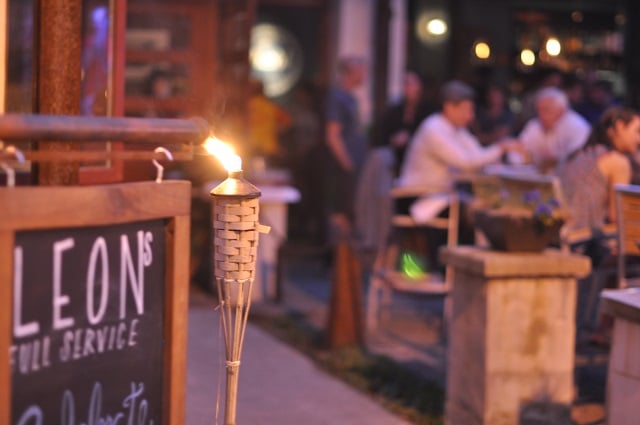 A lot can change in five years, but Leon’s Full Service in Decatur changes all the time.

Nothing is sacred: the menus, the drinks and on March 31 even the decor was negotiable.

Leon’s held a Hawaiian themed anniversary party, complete with grass skirts and leis. Ryan Gallagher, one of the owners, walked around the room shaking hands, wearing a hooligan cap and holding a glass filled with a cold beverage.

“On my way to work, I’m running down Church Street, excited to get to what I do,” he said.

Leon’s anniversary was actually in February, but there usually isn’t a whole lot of patio-sitting going on that month, so Gallagher can be excused for the belated celebration.

Gallagher was manager at the Brick Store, which opened over a decade ago and has become nationally-recognized. When he decided to turn an old gas station on the corner of Ponce de Leon and Church into a restaurant, he carried with him much of what he’d learned working at Brick Store.

“The industry was changing,” Gallagher said. “Everything was going back to craft. Craft beer. Craft food. We were witnessing that. We wanted to share our knowledge of beer and passion for beer.”

Cocktails are also a big part of Leon’s appeal. Gallagher said the spring cocktail menu will include flavors like sweet pea syrup, sunflowers and peanut-infused tequila.

Brick Store and Leon’s like brothers who are total opposites. Brick Store’s wooden interior is reminiscent of captain’s quarters on a ship. The cozy pub feeling contrasts with the openness of Leon’s. On this night, the smell of hot grease and curry wafted over the bar and out onto Ponce. Leon’s, like Brick Store, is the ground zero for the young professional crowd. Some have started families.

“We consider ourselves a community restaurant and bar,” Gallagher said.

Some of Gallagher’s partners have also opened Kimball House on East Howard. Avondale Estates and Kirkwood also have a burgeoning dining scene. He said he thinks it’s great that neighboring communities have rallied around local restaurants. Decatur has rallied around his, he said.

“This is a city of doers,” he said. “There are a lot of forward-thinking folks here.”