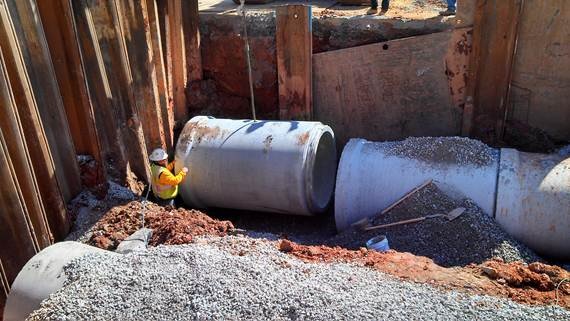 “Starting last night and through today we had a little bit of rain and, to the best of my knowledge for the first time I can remember when we’ve had a lot of rain in a very short period, Maple street did not flood, and the front of the fire station did not flood,” Merriss told commissioners.

The city first announced the storm water project in January 2013, a massive undertaking to replace storm water infrastructure on North McDonough Street, East Maple Street, Church Street and East Trinity Place. For months crews were on the scene, blocking off roads and digging them up to replace the pipes underneath. The original time table for completion was nine months, and the original contract award to Reeves Contracting was $1.3 million. Most of the work wrapped up more than a year later, and the final contract price will be closer to $1.5 million, Deputy City Manager Hugh Saxon said.

Saxon said heavy rains in 2013 delayed the project and said the price increases were the result of unexpected site conditions.

“Change orders have increased the contract amount to $1.4 million,” Saxon said. “I anticipate at least one more change order that will bring the contract amount close to $1.5 million. Generally, change orders have been necessary due to hidden conditions, unsuitable soils, resolution of conflicts with the water and sewer system. In a couple of cases, the scope was changed slightly to make improvements that were unanticipated when the project was designed, adding a drain inlet or replacing a deteriorated or inadequate drainage pipe.”

The city diligently kept a timeline of the project on its Decatur Minute blog, notifying residents of the project’s progress and upcoming road closures.

Saxon said prior to the repairs, it didn’t take much rain to flood Maple Street.

“Any time you had a rain event like we did on Monday (April 7) you’d find a number of properties in the areas that flooded,” Saxon said.

Merriss acknowledged the project has been an inconvenience for residents and businesses, but said the improvements will keep the area around Maple drier than it has been in prior years.

“I know we have been putting up with a lot of construction and a lot of annoyances with the last of the downtown street and storm water improvements, but they appear to have actually worked today,” Merriss said during the April 7 meeting. “The pipes appear to be working just wanted to let you know, all of that investment seems to be paying off, so folks down on Maple Street didn’t have to run and move their cars while it started raining.”