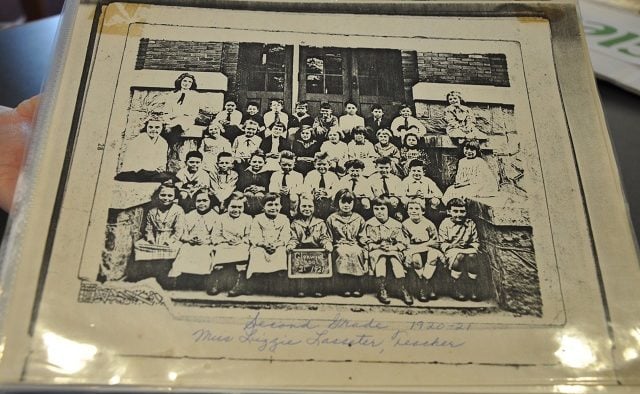 An old photo of Glennwood Elementary, one of many in a scrapbook being displayed as part of the school's 100th anniversary celebrations. Photo of the photo taken by Dan Whisenhunt.
Share 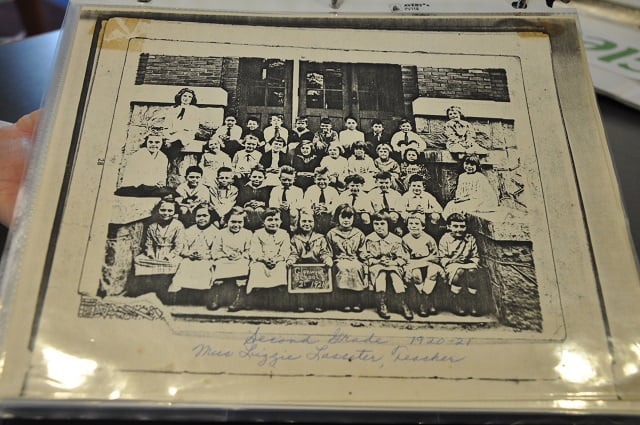 An old photo of Glennwood Elementary, one of many in a scrapbook being displayed as part of the school’s 100th anniversary celebrations. Photo of the photo taken by Dan Whisenhunt.

Glennwood Elementary offers the city of Decatur a window into its past.

On Friday, the school’s staff and parents will celebrate the school’s 100th anniversary. The April 25 event kicks off at 5 pm. In addition to the food and festivities, students also plan to bury a time capsule. Principal Dianna Herron-Watson greeted a reporter with her arms out stretched toward the wooden floor, original to the building. People who come in through the front door are literally stepping onto history.

Her students have been gearing up for the anniversary by incorporating the number 100 into everything, like the Read-A-Thon. Today Glennwood is a K-3 school, and the concept of time is difficult for many of the students to comprehend.

“The younger kids don’t understand the magnitude of it,” Watson said. “At this age, five years is a lot.” 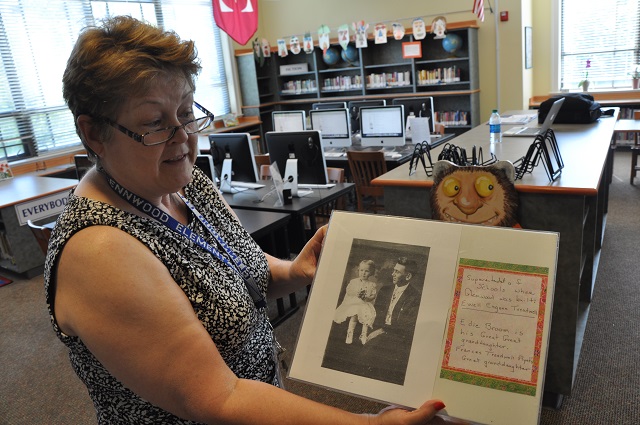 The school opened in the 1913-1914 school year on property once owned by a man named Thomas Glenn. Students had the option of either walking to school or riding a trolley with a track that ended right across the street on East Ponce de Leon Avenue. Kindergarten didn’t exist then, and the school educated students from first through eighth grade. The first principal was Mrs. T.N. Fulton.

It was a whites-only school until around 1969 when a court order desegregated the Decatur system. The pictures in the school’s scrapbooks provide testament to the change.  In the present day, the 100-year-old building is the oldest building in the city that’s still used as a public school.

Watson’s daughter attended the Glennwood in the early 90s when it had fallen into disrepair.

“It was awful,” Watson said. “You couldn’t do anything without blowing circuits.”

CSD renovated the school in 2002. In 2004, the school briefly became the city of Decatur’s fourth and fifth grade academy while the other elementary schools went to K-3. It changed back to a K-3 in 2011 when the 4/5 Academy opened its doors. That’s when Watson became the school’s principal. Today Glennwood has 295 students.

Watson showed off scrap books filled with old photos. Keeping a scrapbook was once a requirement for school accreditation, she said. It’s page after page of curiosity and wonder.

The older black and white photos feature white students dressed like little sailors, wearing billowy white shirts and ties. The conformity classrooms in that era are a stark contrast to expressions of diversity and individualism lining the walls of the school’s library today. Students have a little more freedom to play now. Back in 1913, the older boys had a choice: they could go to study hall or clear brush from what would eventually become the school’s playground.

Fire safety also has improved in the last 100 years. The students used to practice fire drills by escaping down a slide pushed against an upstairs window, Watson said.

She said some of the former students who spent their middle school years at the school still drop in for a visit. While the students today struggle to understand the passage of time, the older alumni remember it as a time where education was a limited opportunity.

“If you got an eighth grade education, that was a big deal,” Watson said.

– The celebration  starts at 5 pm in the auditorium of Glennwood Elementary located on Ponce de Leon Avenue.

– There will be tours and viewings of the school’s scrapbooks.

– At 6:30 pm, everything moves outside for a movie viewing and music. “Music provided by the Glennwood Community Circle Band,” the announcement says.

– The Marlay Tavern will be selling food.

The announcement says, “Bring blankets and chairs for the Glennwood premiere of Frozen! Don’t miss the fun! Movie night is sponsored by our friends at the Marlay. No charge for Glennwood families and friends.”