Kiss a frog – No smooches for middle school merger

Kiss a frog – No smooches for middle school merger 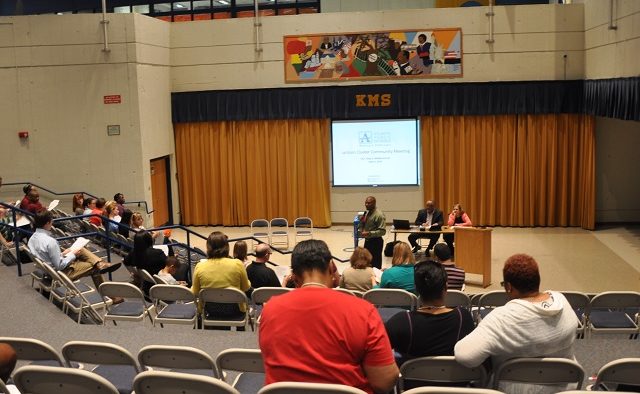 King Middle School Principal Paul Brown speaks to parents in the Jackson High Cluster during a meeting about merging King with Coan MIddle next year. Photo by: Dan Whisenhunt
Share 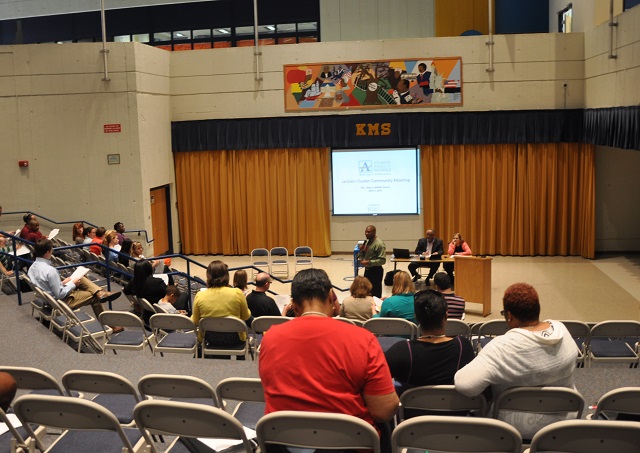 King Middle School Principal Paul Brown speaks to parents in the Jackson High Cluster during a meeting about merging King with Coan MIddle next year. Photo by: Dan Whisenhunt

Brown made his remarks at the beginning of a community meeting about merging his school with Coan Middle.

The merger idea, proposed by outgoing Superintendent Erroll Davis, didn’t inspire parents to pucker up during the April 3 meeting. Some wanted APS to put off making  a decision until Davis’ replacement is hired.

“I personally would like to see both schools stay open,” said Jennifer Botz, the vice president of the King Middle Parent Teacher Association. “I think it’s very important for children to be able to go to schools in their community.”

Members of the board of education who attended the meeting say the low enrollment at both schools needs to be addressed sooner rather than later. Board of Education members Matt Westmoreland, whose district includes the Jackson Cluster, and Cynthia Briscoe Brown both said the schools need to have higher enrollment to provide an adequate middle school experience for students.

If the Board of Education decides to act on Davis’ proposal, Coan and King Middle would be combined at the end of the 2013-2014 school year. Students in the new middle school would attend classes at the Coan campus for one to two years while King Middle undergoes a $10 to $20 million renovation. Starting in July 2014 the middle and high school principals in the Jackson High cluster would hold a six-month discussion about the future of middle school education within the cluster.

Davis didn’t attend the meeting, and no one from the central office was in the room either. Davis is supposed to make his final recommendation to the Board of Education on April 14. At that same meeting, the BOE will consider approving the contract for Meria Carstarphen, a superintendent out of Austin Texas who is the sole finalist for the job.

So how did we get to this point anyway?

After the last round of redistricting in 2012, Coan Middle remained open after an appeal from parents. Then in March of 2013, parents at Toomer Elementary wanted to revisit their idea of turning Toomer into a Kindergarten through eighth grade school. Parents reasoned that it would make Toomer more competitive with Drew Charter School.  But Davis would not support that idea, opting instead to explore other ideas for improving middle school education in the cluster.

“We haven’t had any time to figure out what just hit us,” she said.

King parents were also critical of the idea. They wanted to know why should they have to move to Coan for a year, and why does their building need a $10 million to $20 million renovation?

Information distributed to parents said that Coan’s population should be merged with King because it has the better enrollment number. Davis’ proposal says the school would be renovated “to reflect current design principles for educational facilities.”

Board of Education member Brown said that putting off important decisions until Davis is replaced would put the new superintendent at a disadvantage.

“If we come to a full stop, we’re not ready for day one,” she said.