This May – Elmyriachi plans Kirkwood debut

This May – Elmyriachi plans Kirkwood debut 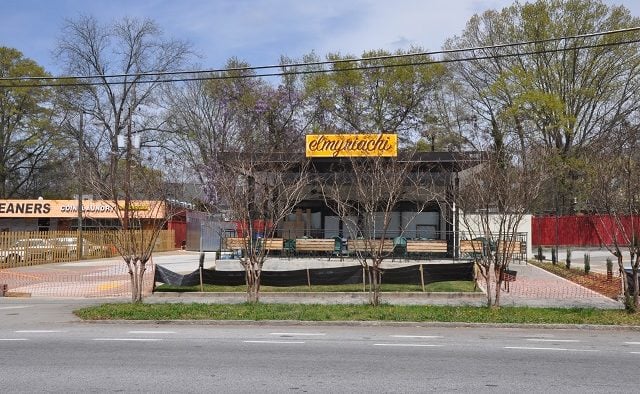 The long-awaited opening of Elmyriachi in Kirkwood should happen this May, one of the owners says.

Jeff Dilbeck, a co-owner of Elmyriachi and its older sibling Elmyr in Little Five Points, said that the restaurant has been in the works for almost a year. Back in October, Atlanta Eater reported the restaurant would open this past winter.

Dilbeck said the restaurant has been through “the maze of permitting.” The restaurant will be located on Hosea Williams Drive, not far from Kirkwood Station. The owners converted space that was once home to a Mrs. Winner’s Chicken and Biscuits. The building has been empty for about five years, Dilbeck said.

“We started with an unfinished basement,” he said. “The final product has been a very specific job. You have permitting issues. The biggest hurdle is the order that everything has to happen in and making sure everybody is on the same page.”

Dilbeck said very little of the original structure is left. The new building will have a much larger kitchen than Elmyr.

“It’s sort of an untapped market that’s about to start going,” he said. “The location itself had 32 parking spaces, and it’s a giant building. We added on a patio that’s going to sit 100 people and it’s partially covered. The parking lot itself was so amazing. We knew it had potential.”

Dilbeck said the menu will be an “interesting fusion” of Tex-Mex, California-Mex and Central American cuisine. There will be a lot of vegetarian options, he said. Elmyriachi will import some items from the Elmyr menu, like the quesadillas and Pad Thai Burrito. The restaurant will have table service and be open seven days a week.

Dilbeck said the Elmyr team thinks their Kirkwood incarnation will fill a niche.

“There’s no Latin food over here at all,” he said. “There are three restaurants that are doing pretty good. There are new spots starting to take off. As a neighborhood, we’re trying to make it more of a destination.”