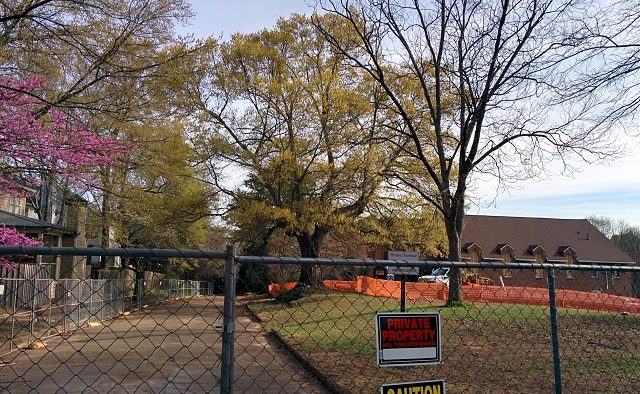 A fence is up around the church at 109 Hibernia Avenue. Soon the church will come down and will be replaced by 20 townhomes. Photo by: Dan Whisenhunt
Share 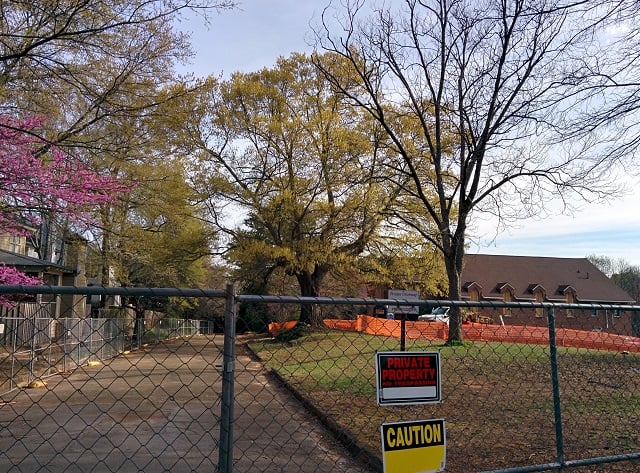 A fence is up around the church at 109 Hibernia Avenue. Soon the church will come down and will be replaced by 20 townhomes. Photo by: Dan Whisenhunt

A developer building 20 townhomes on Hibernia Avenue will pay the city of Decatur almost $7,000 to remove a 100-year-old tree.

The $6,930 will be paid to the city’s tree bank as compensation for the removal.

Records released by the city of Decatur in response to a records request from Decaturish.com also show that the city’s planning department faced pressure from the developer, Thrive Homes, and residents of the nearby Rosewalk Neighborhood. Emails show that Thrive Homes Operations Manager Crystal Robinson kept pressure on the Planning Department to approve plans and answer the company’s questions. Meanwhile, residents of Rosewalk fought to provide input and have their own questions answered.

As of April 2, there was fencing around the property and work crews were on site. Demolition of the church is expected to begin soon.

“The neighbors’ homes are going to be very similar in style,” Rudd told WSB-TV. “We’ve actually spent much time and effort designing our product to closely match theirs and to fit in with the surrounding community.”

According to WSB-TV, Rudd said that the tree has to be removed to comply with city engineering standards.

Rudd told Decaturish.com that the answer he gave was more nuanced than what WSB-TV reported. He said that the tree will have to be removed because the property has to be at a lower grade to make the storm water detention system work.

“We have to get that water running where we could drain it,” Rudd said. “The city of Decatur is one of the strictest municipalities around as it relates to site engineering and storm water retention.”

He also said that the city’s requirements to connect roads to the property would’ve resulted in significant damage to the tree’s root structure. He said the tree wasn’t likely to survive the construction process. In addition, Rudd said Thrive Homes is also planting 74 hardwood trees as part of the development.

“It’s not that we are thoughtless a tree haters,” Rudd said. “I think trees are one of the main reasons people choose to live in town.”

Here’s a copy of the replacement plan. (Click on the thumbnail to see the larger image.) 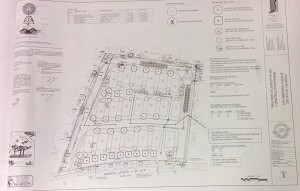 The disputed tree is a 100-year-old willow oak. Residents living near it say birds are still nesting at the site, and have formed a Facebook group to draw attention to the removal of the tree.

Catherine Fox, an environmental consultant who has been involved in advocating for a stronger tree ordinance in the city, said the Thrive Homes development is an example of why the city needs stricter regulations on tree removal.

“I think the current ordinance is a weak ordinance that allows clear cutting by developers which has been one of my main criticisms, and I hope they fix that in the new ordinance,” Fox said.

From the beginning, there has been very little residents living near the development could do to stop it or slow it down. The property was already zoned as high density single family residential. Last month, Thrive Homes withdrew a request for a zoning variance to avoid having to construct a 2-hour, fire-rated masonry wall. That would’ve needed approval from the Zoning Board of Appeals.

Thomspon said Thrive submitted new plans showing that the buildings would be 10 feet apart instead of nine. The change means the fire-rated masonry wall is no longer required, Thompson said.

Emails show that Thompson addressed several concerns about the project.

– There was some question about whether the church site is historic. The church property is formerly the site of Christ Covenant Church, but prior to that it was the home of the Antioch African Methodist Episcopal Church, the first black church established in the city of Decatur. The church was established in Decatur in 1868 and moved to Hibernia, then called Atlanta Avenue, in 1965. The church relocated to Stone Mountain in 1995. Thompson researched the issue.

“The 2009 Historic Resource Survey included this structure in the Adair Park neighborhood, and it was determined to be non-contributing,” Thompson wrote in an email to city officials. “That means it was not considered a historic resource in 2009.”

– Residents posed several questions about how the site will address storm water runoff. Thompson said the developer has to capture and detain all storm water runoff. She said that the final storm water management plan hasn’t been approved. Under the draft plan, Thompson said, “They will have an underground detention vault in the rear of the site and it will connect into a city storm sewer. It travels through pipes that go under Swanton Hill Drive, and is conveyed into the downtown system.”

– There were some questions about whether there were any deed restrictions on the property. At one time, all of the property in question was owned by the Decatur Housing Authority. Thompson said DHA had a say in any development on property formerly owned by DHA, but that restriction expired in 1991.

Thrive Homes and the residents will meet on April 8, Thompson said.

“The purpose of this meeting is for Thrive to explain what their construction timeline will be, show elevations and we’re going to have a smaller group meeting for them to work out more specific issues like retaining walls and plantings,” she said.

Rudd said the city classifies the project as detached townhomes, but it would be more correctly described as detached cottages. He said when completed, the price range for the homes will be $450,000 to $550,000. He said the first homes should be ready for someone to move in some time this fall.

“We’re approaching 50 percent reserved at this time and many of the reservations are folks that are coming from Rosewalk, believe it or not,” Rudd said.

Here are some artist renderings of the project, provided by Thrive Homes. 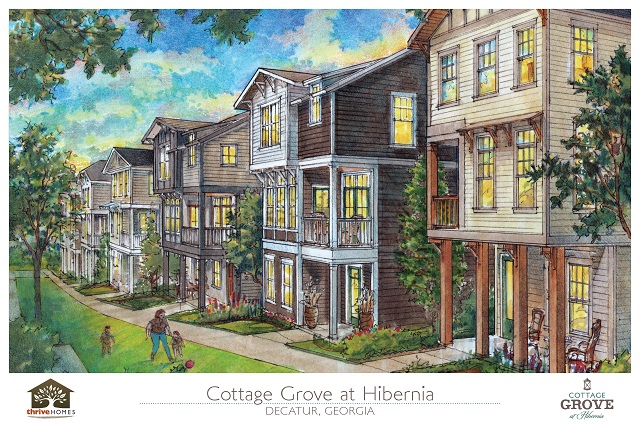 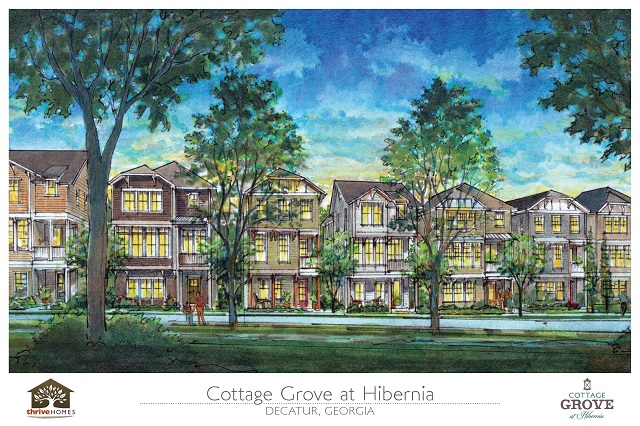 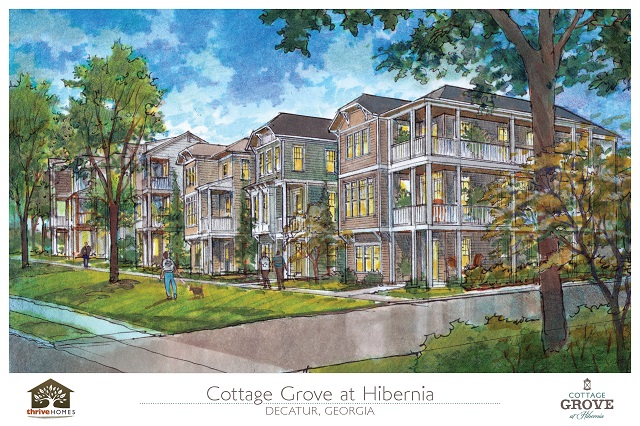