UPDATE: Decatur Police Chief Mike Booker has released a statement about the department’s participation in this ongoing conversation. His full statement is reprinted at the end of this article.

For the last few weeks black men living in the city of Decatur have been opening up about their experiences with the city’s police department.

On Monday, some of those same men gave the Decatur City Commission a plan to address their concerns that officers are racially profiling them.

Don Denard, a former school board member, first brought the concerns to the City Commission’s attention back in January. Denard said he felt that he was racially profiled when he was stopped by police on Dec. 15 while walking down the street near his home. An internal police department investigation cleared the officer, but Denard’s story got people talking.

On March 30, about 70 people gathered at Oakhurst Presbyterian and listened to black residents tell their stories.

The people who say they were profiled include Terry LeCount, a former NFL wide receiver and paraprofessional at Oakhurst Elementary and the grandson of former Mayor Elizabeth Wilson.

They decided to form The Decatur Community Coalition. Denard spoke for the group at the meeting.

“We are formally presenting these recommendations to you tonight … with the expectation that we can embark upon a process that will ultimately produce a favorable impact in terms of avoiding allegations of racial profiling and preventing unnecessary harm, such as a death,” Denard told commissioners.

Denard spoke about the group’s specific recommendations, which he shared with Decatur Police Chief Mike Booker.

– The city commission adopting a formal policy, proclamation or ordinance banning racial profiling in the city of Decatur, GA

– Discontinuing the use of “numbers of citations/arrests” in police performance evaluations.

– Requiring police officers to record the perceived ethnicity, gender and age of people they stop, and requiring officers to report the reason for the stop and the outcome of the encounter.

After Denard spoke, several other men who spoke at the March 30 meeting recounted their experiences to commissioners. To hear their stories, click here.

The full list of recommendations is reprinted at the end of this article.

City Commissioners took no specific action on Denard’s request, but said they would consider it.

Commissioner Kecia Cunningham, who is black, thanked Denard for his presentation.

“I really appreciate you sharing your stories. I would be lying if I said I did not at some point in my interactions in my time here in Decatur did not feel that I got some extra attention … ,” Cunningham said. “I think that’s just an unfortunate reality that we can do something about, and one of the things I really appreciate about what’s been brought to us is they’re very specific items, not nebulous and floating. Part of what we can do in Decatur is do better.”

Mayor Jim Baskett said he had apologized in person and in public to Denard, and gave his personal apologies to the other people who spoke during public comments on Monday.

“Growing up in the South as I did, if you’re my age, you recognize that it takes a great deal of vigilance, self-inspection and checking of yourself and your attitudes and the way you relate to others,” Baskett said. ” …  We can’t ever sit back and say ‘Oh, no. We’re good. We’re better than that. We’re a progressive community. We’ve got all that worked out, and all that behind us.’ No, we have to continually make certain that we are engaging our own ideas, engaging other people in dialogue and conversation and making sure that our own biases and our own fears are not making anyone in our community ever, ever feel like a lesser part of the community.”

Here is the list of recommendations presented at the April 21 City Commission meeting. 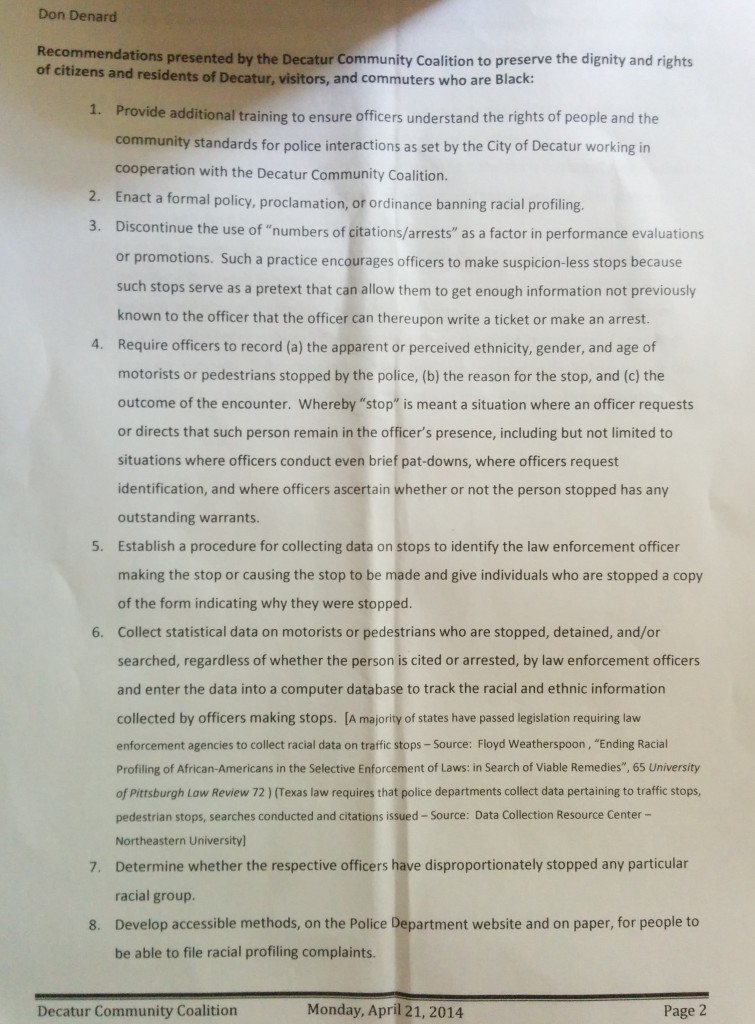 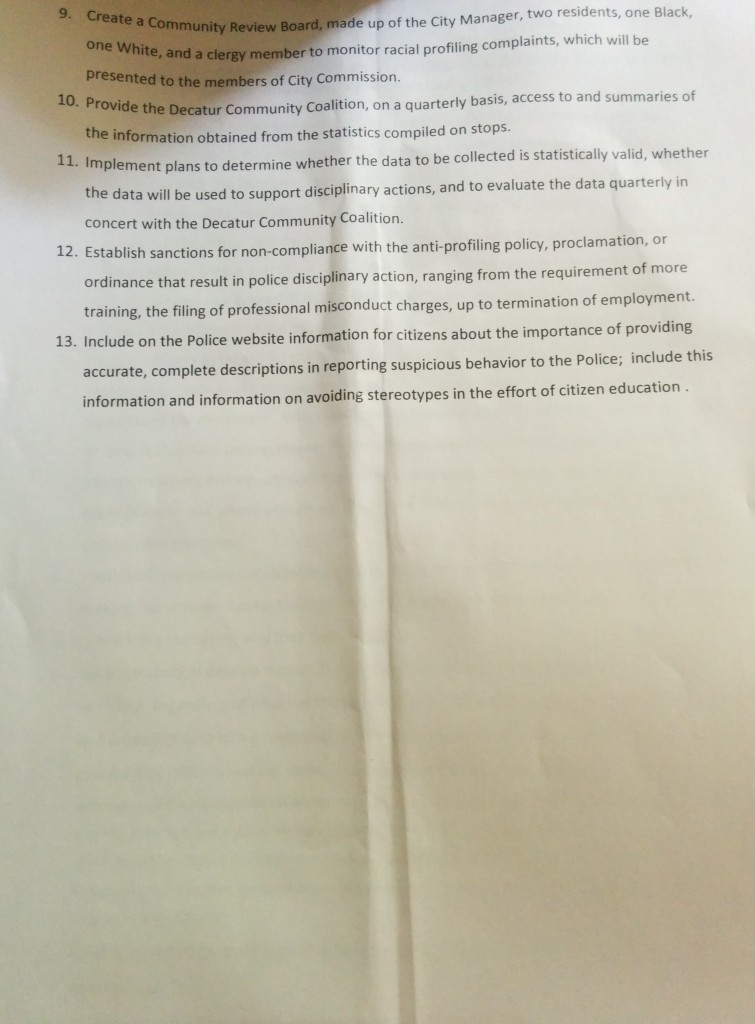 UPDATED at 3:41 PM. This afternoon Decatur Police Chief Mike Booker sent the following response to a question about his meeting with Don Denard. Here’s what he had to say:

I met with Mr. Denard yesterday in downtown Decatur, along with Ms. Manson, Mr. Nathaniel and Reverend  Stroupe.  Assistant City Manager David Junger accompanied me to the meeting.    We listened to their comments and concerns related to racial profiling.  Mr. Denard presented me with a pamphlet and an envelope that contained a list of recommendations that he was going to present to the City Commissioners at their meeting later that night (April 21, 2014).

The meeting was a very cordial conversation where I listened closely to their concerns and I posed some additional questions for Mr. Denard to consider when thinking about the Police Department’s responsibility to keep Decatur safe.  We talked about continuing the efforts to participate in the discussion regarding concerns of racial profiling in our community. I told Mr. Denard that I am willing to continue to meet with their group as well as any other members of the community about their ideas and concerns.   We as a City and department are always available to talk with groups throughout the city about any and all issues.   We are very concerned by the comments that have been made and are taking these complaints very seriously. It is our responsibility to make Decatur a safe and hospitable place for all members of our community.