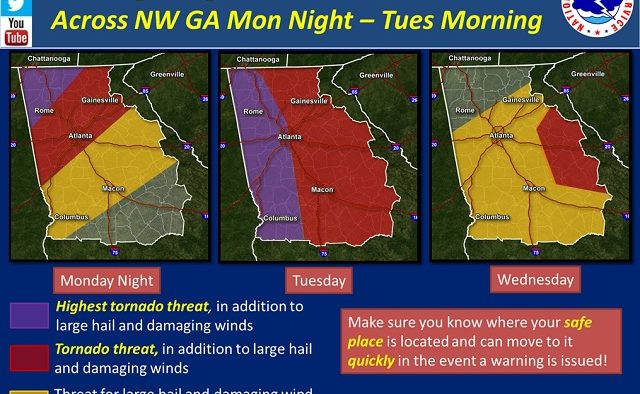 UPDATE: The National Weather Service has issued a Tornado Watch for DeKalb County until 1 am, April 29.

The continuing threat of severe weather over the next few days includes a risk of a tornado forming in DeKalb County.

DeKalb County Commissioner Larry Johnson has released a bulletin from the county that urges residents to pay attention to weather updates and use caution. The county warns residents to expect heavy rain and winds during the morning commute on April 29.

“Bottom line:  please drive carefully and continue to monitor the news for the latest information regarding the weather,” the announcement from the county says. “The weather situation is changing quickly so please remain vigilant over the next 48 hours.”

Severe weather already has caused devastation in three states and killed more than a dozen people, the Associated Press reports.

The county also sent along this image, created by the National Weather Service: 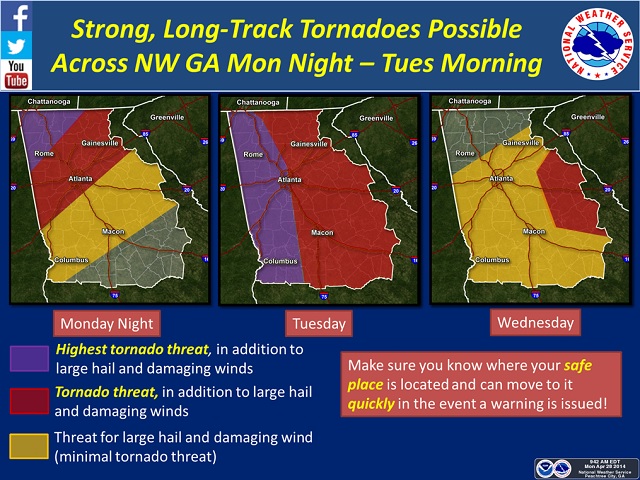 “Think of these shaded area more like the Hurricane Cone of Error,” the bulletin says. “They can shift if system speeds up or slows down.”

Here is the weather outlook for the next three days, according to the bulletin from DeKalb County:

7 am Tuesday, April 29, – 7 am Wednesday, April 30
All of Georgia is in a slight risk for severe storms
– ***the forecast for this timeframe could change depending on system speed and intensity and what happens to the atmospheric conditions tonight.*** STAY WEATHER AWARE!!
Damaging Winds- High Threat
Hail- Medium risk

7 am Wednesday. April 30, – 7 am Thursday, May 1
– Metro Atlanta will still be under a slight risk for severe weather
– This will be updated and a new forecast will be issued.

Potential for Flooding
– Flash Flooding could be an issue in creeks and streams that have issues with flooding.
– Timing tonight – Thursday
– Minor to moderate river flooding
– isolated flash flooding
– Flood Watch in effect starting Late Tonight
– North Georgia could see 2.00 – 4.10 inches of rain throughout the Metro Area.
– Use Extreme Caution while driving. keep people off roads tonight.
– in 2009 fatalities were at night and all but 2 were in cars.
– PLEASE get the word out about tomorrow morning’s rush hour. Residents are urged to check the weather before they get on the road to go to work.

The city of Decatur has released its own alert to residents about to weather and published this list of tips about what to do in case you hear one of the city’s tornado sirens sound.

The city says if you hear a siren, “Take immediate cover. Go indoors to a safe room at ground level or below with as few windows as possible. Basements are usually the best option. If you are in a vehicle and see a tornado approaching, get out immediately and go to the lowest floor of a sturdy, nearby building. If a building is not available, lie flat in a nearby ditch or depression and cover your head with your hands. Be aware of the potential for flooding. Do not get under an overpass or bridge. You are safer in a low, flat location. Never try to outrun a tornado in urban or congested areas in a car or truck. Instead, leave the vehicle immediately for safe shelter. Watch out for flying debris. Flying debris from tornadoes causes most fatalities and injuries. Stay in a safe place until the weather improves.”