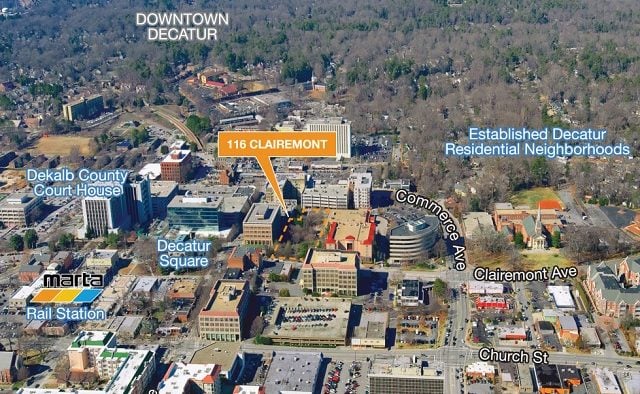 This map published by Pope & Land Enterprises shows the potential site for a future hotel in downtown Decatur.
Share 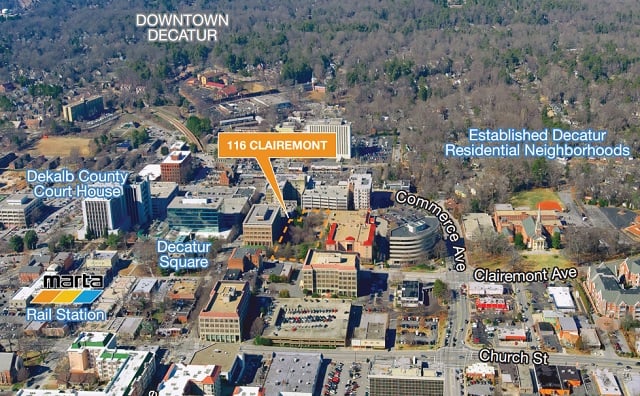 This map published by Pope & Land Enterprises shows the potential site for a future hotel in downtown Decatur.

A Chattanooga, Tenn. company thinks downtown Decatur is a nice place to visit and wants to build a hotel here.

Vision Hospitality Group is in negotiations to buy property at 116 Clairemont Avenue next to the Courtyard by Marriott, according to a story on Decatur Metro. Assistant City Manager Lyn Menne told Metro that the company will construct a 138 room hotel.

Decaturish got in touch with Andrew Hibbard, Director of Investments for Vision Hospitality. He said the company hasn’t closed on the 1.2 acre parcel yet and is still going through the due diligence process.

“The site that we’re looking at is it presents some challenges as far as what we’re actually going to be able to accomplish on the site,” he said.

The Metro story says the company has asked for a parking variance to reduce the number of spaces required.

Hibbard said the topography of the site is a challenge and it has easements the company will need to work around.

“There are some quirks in the site that we’re looking at,” he said. “We need to see how that’s going to flow with the hotel and again, figure out the footprint and put that in front of the city and see if they’re comfortable.”

Hibbard said it’s a little too early in the game to say what the finished product will look like. He said the room rates will be comparable to the Marriott’s. He said the company doesn’t have any definitive timetable on when it plans to build the hotel or an estimate of what it might spend.

The property is being represented by Kirk Billings with Pope & Land Enterprises. Billings said he couldn’t release the asking price for the site because the deal hasn’t closed yet.

Vision Hospitality started in Chattanooga in 1997. The company owns the DoubleTree by Hilton in the city’s downtown, and owns several properties Georgia, including hotels in Duluth, Columbus and Kennesaw.

Hibbard said Chattanooga and Decatur share similarities. Both are urban, walkable environments. He said downtown Decatur appeals to the company because of the economic diversity of its retail, its connection to MARTA and its proximity to Emory.

“It’s a really unique market,” he said. “It’s obvious there’s a lot of fantastic stuff that’s going on in Decatur. One of the guys in our office used to live in Decatur. We’re all a little familiar with the market. It’s a high-barrier to entry market. There aren’t any many opportunities for hotel protects to happen.”