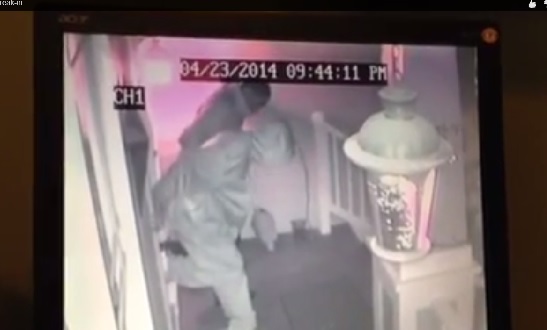 A screen shot of a video from an April 23 break-in attempt near Decatur.

Renee DeGross Valdes lives in unincorporated DeKalb, just outside of Decatur, and had a scare the evening of April 23.

Two men attempted to break into Valdes’ home around 10:16 pm. Valdes captured the attempted home invasion on a home security camera.  The incident happened at Valdes’ home on the 2800 block of Craigie Avenue.

Valdes said via email that, “At approximately 10 pm, one suspect (stockier male) came up on the front porch to stake out the house. He left about a minute later and walked back down the driveway to Craigie Avenue. Approximately 5 minutes later at 10:15 pm, the male suspect returned with a second suspect (more thin build) and worked their way through our porch security gate and walked up onto our porch. They looked through the windows on our door and assumed no one was home. The other peered through our porch windows but we had closed curtains..

When it appears they thought no one was home, they kicked simultaneously several times. The video explains the rest.”

Valdes said, “We have other views from our video feed from two cameras. (They) are being provided to Avondale, DeKalb and Decatur police departments given recent burglaries in our area. Police responded to my 911 call. It lasted 6-7 minutes until Avondale and DeKalb police responders arrived. My 7 year old was hiding and I was trying to yell at the perps but they could not hear me. The alarm sounded and that’s what appears to have scared them off.”

Decaturish requested and received a report about the incident from DeKalb Police.

The officer wrote, “Upon my arrival I met with Ms. Renee Valdes … who stated that someone tried to break into her home. Ms. Valdes stated she was upstairs in her bedroom with her daughter. She heard a loud banging coming from her front door and yelled out. She stated the loud banging continued and the alarm was triggered. She stated she told her daughter to get under the bed and called 911.”

Editor’s note: The victim in this case sent along an email on April 25 clarifying her earlier quote. This quote has been updated to reflect the new information.