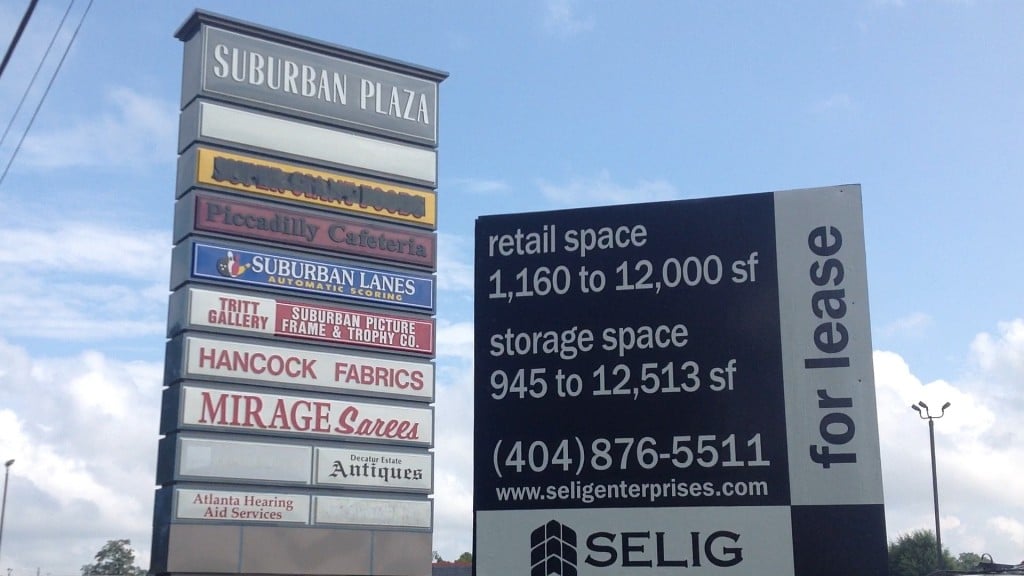 Good Growth DeKalb has announced it is suspending its fight against a Walmart at the Suburban Plaza shopping center.

“Faced with increasingly limited legal options, we accepted an invitation to meet with Selig Enterprises, owner of Suburban Plaza, on April 17,” the group said in a press release. “This was a difficult decision and a difficult process and, while we continue to believe a Walmart is wholly unsuited to this location, our legal battle is now over.”

Decaturish spoke to Selig Enterprises Vice President of Acquisitions and Development Scott Selig about the announcement.

“I’m always glad a legal battle is over,” he said.

Asked when he’d begin construction of the Walmart, Selig said, “ASAP.” A press release from Selig is included at the end of this article.

“We have been and intend to continue to addressing other community issues, including the new zoning code and Dunkin’ Donuts on Scott Boulevard,” Runyon said.

UPDATE on May 1: Walmart has released a statement about Good Growth DeKalb’s announcement.

Bill Wertz, a spokesperson for Walmart, said, “We are delighted that the legal issues around our new Supercenter at Suburban Plaza have been resolved. Our new store means greater choice and more affordable grocery options for our customers, plus approximately 300 new jobs and a boost to the local economy. We greatly appreciate the support we have received from so many throughout the planning and approval process.”

Here is the full press release from Good Growth DeKalb.

DECATUR, GA – For more than two and a half years, Good Growth DeKalb has been the voice of residents concerned about the proposed redevelopment of Suburban Plaza, especially the decision to include a 149,000-square-foot Walmart Supercenter at the intersection of Scott Boulevard, Medlock Road and North Decatur Road. Our concerns have been neighbors’ concerns – traffic, safety, emergency vehicles, the environment, good jobs for the community, small business viability, etc.

Faced with increasingly limited legal options, we accepted an invitation to meet with Selig Enterprises, owner of Suburban Plaza, on April 17. This was a difficult decision and a difficult process and, while we continue to believe a Walmart is wholly unsuited to this location, our legal battle is now over.

In exchange for agreeing not to pursue further legal action against DeKalb County over the granting of the Walmart building permit, we were able to obtain some relief for the individual plaintiffs whose homes are adjacent to the plaza. We also negotiated gains for the community, including a commitment from Selig to contribute a significant amount of money for a sidewalk along Medlock Road between North Decatur Road and Church Street. In addition, Selig Enterprises will arrange a meeting between Good Growth DeKalb and Walmart to discuss issues of importance to the community.

Moreover, as a result of our legal fight, DeKalb County has confirmed that it has never staffed or operated the Technical Board Appeals that the County Code of Ordinances establishes as the review panel for many issues, including building permits. It is our hope that this admission will lead to better and more efficient governance and management of our county in the future in accordance with our laws.

We are especially grateful for the support of our community, who stood with us during this long fight – and for our many donors, large and small, who enabled us to work to make our county and our neighborhoods a better place to live, work and play. We are very proud that, together, we’ve built an organization that is a recognized presence in DeKalb County, a force to be reckoned with, and that we are part of a movement spreading all over the country to encourage smart development, improve our communities, and say no to unwanted development.

Today, Good Growth DeKalb is working with other community organizations to ensure that the new DeKalb County zoning code reflects the best in zoning practices as well as community interests. We are gratified to have helped defer a vote on the new code over concerns that it still fails to address the ability of aggrieved parties to appeal unwanted development. We will continue to work with county officials and other neighborhood groups to resolve this issue before the zoning code next comes up for vote at the Board of Commissioners meeting on Tuesday, May 27.

For more information about Good Growth DeKalb and how to get involved, please visit www.GoodGrowthDekalb.org.

Here is the full press release from Selig Enterprises:

Selig Enterprises, Inc. is pleased to announce that after an almost two year legal delay over the redevelopment of Suburban Plaza, all litigation between Good Growth Dekalb (GGD) and Dekalb County has been resolved and the redevelopment can resume.  During lengthy discussions with GGD, Selig was able to address most of GGD’s concerns in a manner that will only improve our planned redevelopment of Suburban Plaza, including agreeing to the installation of additional sidewalks along Medlock Road, as well other improvements such as landscaping and fence repair next to the neighborhood of homes located directly to the rear of the shopping center.

Selig has always worked diligently with neighborhood representatives during its construction projects and this case has been no different.  Selig would like to recognize and thank the representatives from the Medlock Area Neighborhood Assoc., Clairmont Heights, Medlock Place, Springdale Heights, and Decatur Heights, Sycamore Ridge, Sycamore Station, Glendale Estates, and the Christian Towers for providing valuable input over the past three years and helping Selig to transform the area with quality development.  Many details of the project have been the result of years of collaboration with these neighborhoods and have resulted in numerous features of the redevelopment, such as:  sidewalks, bike paths, and /or multi-use paths around all street frontages, interior pedestrian connectivity, several pocket parks, increased landscaping, the addition of almost an acre and a half of green space, architectural design elements, and traffic calming measures on surrounding streets.

Selig also appreciates GGD’s efforts to improve its community.  The additional items Selig agreed to do will further enhance the surrounding area.  Selig hopes to continue to work collaboratively with representatives from all surrounding neighborhoods and Dekalb County to continue to enhance the redevelopment of Suburban Plaza.

In addition to the Walmart, Selig is excited about the continued interest in the project by potential tenants – including LA Fitness (which will include a daycare facility), HomeGoods, Jo-Ann Fabric and Craft Stores, and others to be announced at a later date.

The proposed redevelopment will significantly transform the appearance of the center and has already shown to be a catalyst for other development projects in the area.  Selig expects to begin construction immediately and looks forward to completion of the project that will serve the community.