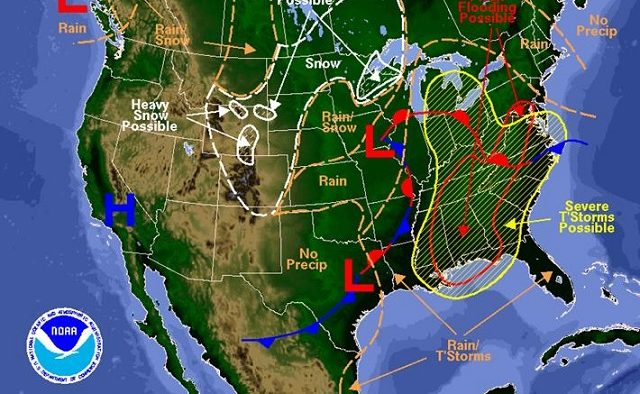 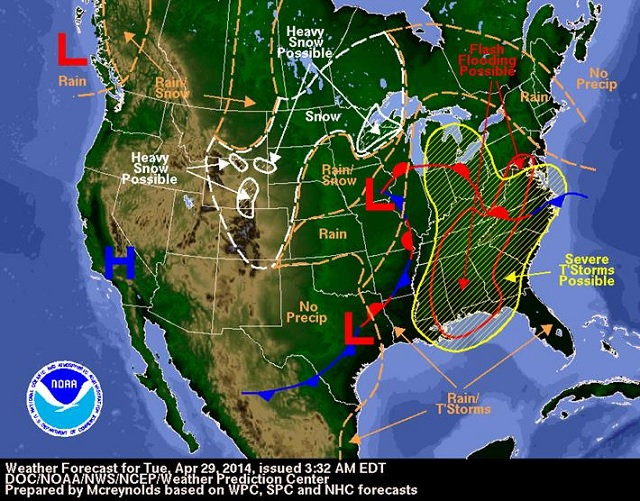 The Hazardous Weather Outlook for our area looks pretty hazardous.

The sun may have come out this afternoon, but it’s all an illusion forecasters say. According to the National Weather Service, things are about to get serious in northwest and central Georgia.

Let’s review some of the key predictions in this afternoon’s NWS report:

– Scattered and severe thunderstorms are expected this afternoon and tonight over north and central Georgia. There’s also a flood watch in effect until 2 am, May 1.

– We can expect widespread rainfall of 1 to 3  inches through Wednesday. There are areas of northwest Georgia that already have received 1.5 inches to 3 inches of rain. “Isolated flash flooding may be possible, mainly over north Georgia,” the NWS bulletin says.

– “A slow moving cold front will move into far northwest Georgia late tonight,” the weather bulletin says. “Moderate instability and wind shear will allow for the potential of severe thunderstorms this afternoon and tonight over north and central Georgia.”

It looks like the weather will be here for a few more days. The bulletin says the risk for severe thunderstorms continues on Wednesday with damaging winds and isolated tornadoes being the “most likely threat.”

On April 28, Gov. Nathan Deal declared a State of Emergency for Georgia that remains in effect until the weather subsides.

Rain and wind caused widespread power outages today, and even brought a halt to CRCT testing in City Schools of Decatur classrooms.