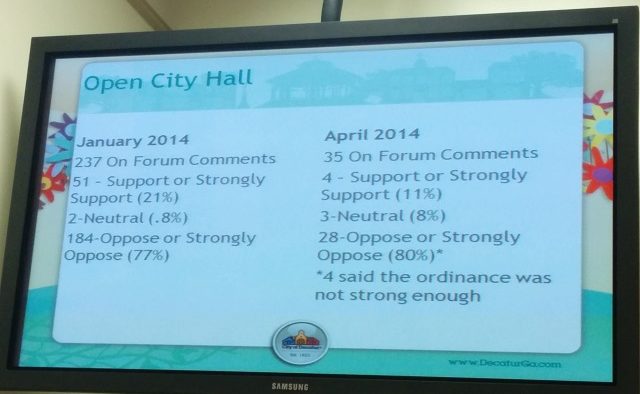 This slide shows how residents responded to the current draft of the city's tree ordinance. Photo by Dan Whisenhunt
Share 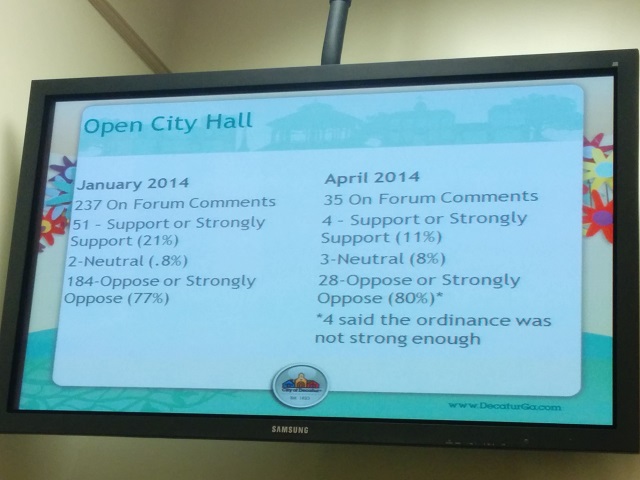 This slide shows how residents responded to the current draft of the city’s tree ordinance. Photo by Dan Whisenhunt

Decatur City Commissioners on Monday took a few more whacks at a proposed ordinance that would place new restrictions on tree removal in the city.

The ordinance will appear on the commission’s May 19 agenda.

Decatur published a draft of the revised ordinance on April 7, for public comment. Commissioners had considered a version of the ordinance in January, but rejected it after a public outcry. The ordinance places new restrictions on property owners who want to remove trees from their property, but the revised ordinance gives them a little more flexibility than the first draft did. City commissioners lowered the canopy goal of 50 percent to a “no net loss” policy of 45 percent. Residents will be allowed to remove up to three trees in 18 months without penalty, but will have to file an informational permit.

Planning Director Amanda Thompson provided commissioners an update on the feedback during the May 5 meeting.

“We’ve been having this conversation for awhile,” Thompson said. “The reason why is it’s asked for in our strategic plan. The community does have a desire to protect the tree canopy. The majority of the city’s tree canopy is on private property.”

Commissioners on Monday made a few suggested revisions:

– The ordinance should include the definition of a specimen tree. Thompson said a specimen tree refers to a certain size of tree used by property owners.

– The ordinance should give property owners double credit for preservation of specimen trees, a suggestion made by the group Trees Decatur.

– Provide a sliding scale for property owners that have greater than 45 percent canopy coverage. Under the current draft, property owners have to pay back 50 percent of the square footage of trees removed, regardless of their current canopy cover. “If I remove 3,000 square feet, I have to pay back 1,500,” Thompson said. The suggested change would give a homeowner with greater tree canopy more flexibility.

City Manager Peggy Merriss said the city is still looking to fill the position for a city arborist, called a “Landscape infrastructure coordinator.” The arborist would be the primary staff person responsible for enforcing the city’s tree ordinances.