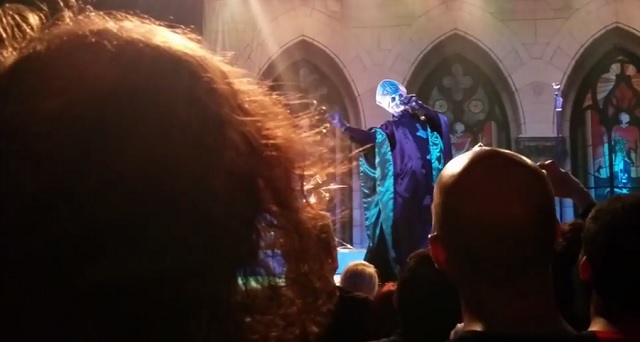 Ghost BC plays at the Center Stage Theatre in Atlanta. Photo by Dan Whisenhunt
Share

Ghost BC plays at the Center Stage Theatre in Atlanta. Photo by Dan Whisenhunt

I have a confession.

I have seen Ghost, and banged my head to the tune of its Satanic hymn.  They were at Center Stage Theatre in Atlanta last night.

Ghost is a Swedish metal/goth/glam band with a lead singer who dresses like a Satanic pope surrounded by musicians wearing black masks with long, dark robes. (They’re called Ghost BC in the U.S. because of some copyright thing.)  The singer is called Papa Emeritus and the band members are called Nameless Ghouls. No one knows their true identities. The performance had the trappings of what I can only imagine a Black Mass looks like.

Papa E conducted his Ghouls like they were his orchestra, and they did everything with an eerie precision. It’s the most perfect a fusion of heavy metal and theater you’ll find anywhere in this life, and possibly the next, regardless of whether you’re going down or up.

Papa E., whoever he is, talks with an Eastern-European sounding accent and has a compellingly charismatic stage presence.

“It is not too late for you tonight, Atlanta,” he said.

He was also unexpectedly funny and charming, in an undertaker kind of way.

“We will do one last song for you,” he said toward the end of the set.

They stuck around and squeezed in a few more songs.

One of the more interesting things about Ghost is their tendency to do Satanic choir riffs on popular music. Last night they played a cover of “Here Comes the Sun” by the Beatles. The lyrics were the same but the song took on an entirely new meaning. (Hint: The sun is probably Satan.)

I don’t worship Satan, but if I did, I’d definitely try to book these guys for my next unholy get together.

Center Stage Theatre wasn’t a bad place to see them, either. You had the option of standing in the pit in front of the stage or sitting in the audience for a top-down view of the proceedings. I spent most of my night in the pit next to a guy who swung his long blond hair around like he was a human weed whacker. I didn’t much care for the hair in my face, but at least he generated a pleasant breeze. It was hot as hell in that place, which is appropriate I suppose.

Special note to Atlanta fans: One of the openers was a Satanic folk singer act called King Dude. I’ll admit, King Dude didn’t really make an impression on me, but I think it had more to do with him following some other metal band from Sweden whose name escapes me. Some total tool of a human being shouted, “You suck!” in the middle of Dude’s set. The blond-haired gentleman stopped his head twirling to call him out for being a worthless human being. Seriously, if you don’t like a band’s music, you are free to leave my friend.

King Dude politely extended his middle finger toward his heckler. I wasn’t completely into Dude’s music, but I was with him on that one. Eff that guy.

I’ve got Ghost on my watch list. It’s a show like no other. Do not go there unless you are sufficiently prepared to rock. It’s loud, epic and everything they warned you about in Catholic Sunday school.

Forgive me, for I have sinned. But it was so worth it.

Editor’s note: An earlier version of this article incorrectly identified the location of the theater. Center Stage is located in Midtown, not downtown.