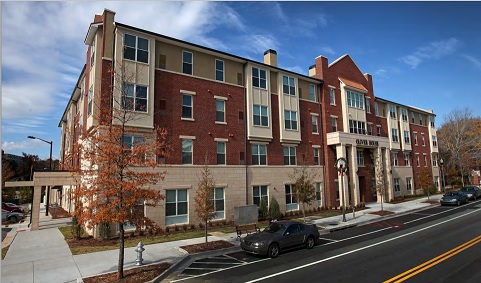 Since Gov. Nathan Deal signed House Bill 60, known as the “guns everywhere” law to its critics, most of the attention has focused on what the law means for churches and bars.

The law also purports to do something else. According to the bill’s advocates, the law prohibits bans on firearms in public housing.

The National Rifle Association says this will ensure, “that the right to self-defense should not be infringed based on where one calls home.”

But public housing officials in the metro area and an organization that represents housing authorities around the state say that the law doesn’t apply to them, because they never banned gun ownership in the first place.

“We want to extend the right to self defense to law abiding citizens whether they live in a gated community or public housing,” NRA spokesperson Catherine Mortensen said.

Russell Nast, vice president over legislation for the Georgia Association of Housing and Redevelopment Authorities, said to the best of his knowledge no public housing authority in Georgia prohibits tenants from owning guns.

“I’m not aware of any housing authority in Georgia that prohibits anyone from possessing a firearm inside their apartment,” Nast said.

Nast said GAHRA the organization has asked the state to clarify the law.

“Right now we’re trying to get language from the state about exactly what the bill means for public housing,” he said.

Jerry Henry, Executive Director of the Second Amendment advocacy group Georgia Carry, told Decaturish that as far as he knows there is no such prohibition in effect among Georgia Housing Authorities. Nast and Henry both say the NRA pushed for the public housing language in HB 60.

“We felt that it was not necessarily needed, over our experience, but we didn’t object to them putting it in,” Henry said.

Henry said Georgia Carry didn’t want to hold up the bill over the public housing language.

“Unless we really have a big objection to it, we go along with it,” he said. “There’s no need in everybody fighting the bill if we’re all getting something we want.”

The Decatur and Atlanta Housing authorities both say that prior to the passage of HB 60, their tenants could own guns. The DeKalb Housing Authority says it no longer owns public housing, and only issues Section 8 vouchers.

“Citizens residing in communities owned by AHA were not prohibited from owning legally registered firearms prior to HB 60,” Atkins said.

Doug Faust, executive Director of the Decatur Housing Authority, said “there’s no change” in Decatur’s rules because of the new law.

“Families were able to own a firearm before the passage of this law,” he said.

Faust said leases at the Housing Authority include the following language with respect to guns:

Mortensen said there have been cases around the country that show the need for specific language regarding public housing. She said the state of Mississippi recently enacted an NRA-backed bill that’s similar to Georgia’s new law.

She pointed to a case in Delaware where a housing authority told tenants they couldn’t carry guns into common areas, like laundry rooms. The state Supreme Court sided with the tenants in that case.

“As we saw in Delaware just this year, this is a problem around the country,” she said.