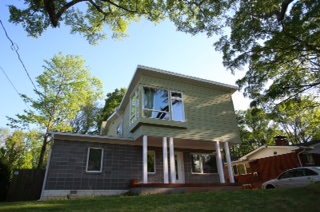 This home on Wisteria Way is one of eight featured on the Kirkwood Tour of Homes. Source: http://www.kirkwoodfling.com/tour-of-homes/
Share

This home on Wisteria Way is one of eight featured on the Kirkwood Tour of Homes. Source: http://www.kirkwoodfling.com/tour-of-homes/

Back in March, the Kirkwood Neighbors’ Organization sent a plea to residents, asking for people willing to participate in this year’s Tour of Homes.

The homeowners responded, and now there are eight homes on the tour, which is being held in conjunction with the neighborhood’s annual Spring Fling event.

The Spring Fling is Saturday, May 17, from 10 am to 8 pm at Bessie Branham Park in Kirkwood. The Tour of Homes is Saturday and Sunday from 12 pm to 6 pm. To purchase tickets, click here.

Festival Chairman Buzz Burton said the number of homes is consistent with prior years. He said it can be a challenge to find homeowners willing to open their doors to tourists for two days.

“It’s a big time commitment of a whole weekend,” Burton said. “It has to be open. It has to be clean. Most of the houses we want to show, people have redone because their family is growing. They usually have kids and they want to be at the festival and they don’t want to keep their house clean for two days. It can be a challenge to get them. There are some houses that are just great architectural houses in our neighborhood.”

One of the notable homes on the tour is a renovated and expanded ranch home on Wisteria Way, designed by Kirkwood architect Joe Alcock. He said the homeowners wanted something to accommodate their growing family that would also be a unique design.

“We were asked by the owners to take their existing really kind of mid 50s, mid 60s small ranch house and up-size it for their growing family,” Alcock said. “They had one kid at the time and they have two now. We took off the roof and rebuilt it and it went from a three bedroom one bath to a five bedroom three bath house (and) added a real open floor plan with a family room.”

According to a listing published in the KNO newsletter, the homes on this year’s tour are:

– 139 Howard Street, described as a “Hidden arts and crafts gem.”

– 1675 Wade Ave., described as a “Prime location renovation near park and the Path.”