Intersections – The problem with the Tooth Fairy

Intersections – The problem with the Tooth Fairy 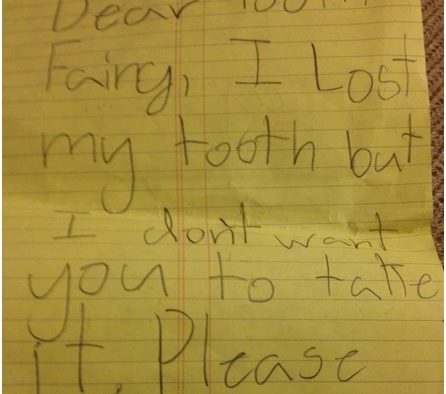 I never believed in Santa Claus. His handwriting looked too much like my father’s. But I wasn’t the kid who spoiled Santa for other kids. I loved believing in things. Aliens, Santa Clause, the Falcon’s going back to the Super Bowl. I believe in magic, but I’m honest about it. It doesn’t help that I won’t pretend to be the Tooth Fairy.

My daughter lost a tooth last month, and it took my three days to remember to put money under her pillow. By money, I mean a single United States of America one dollar bill. One dollar. Not $5. Not $20. A dollar is great considering I got a quarter at her age, and I’m four times her age now. Simple math. One dollar.

The problem isn’t the money. My kids just accept the money gladly. They love the $1, because the alternative is me forgetting indefinitely. I’m the worst Tooth Fairy ever.

Last month, my daughter came to me disappointed because the Tooth Fairy forgot to visit her. I reminded my daughter that our Tooth Fairy never visits on the first night. We have a Second Night Tooth Fairy. This didn’t seem to bother her. The next morning when there was still no visit from the Tooth Fairy, she began to worry.

I did something terrible. This is what I said.

“Honey, it takes a village to be the Tooth Fairy. Do you know how many are in the village today? One. Your mother is a village of one. She forgot to put the money under the pillow,” I said. Had my husband remembered, he would have pulled out a $5, because he is The Good Tooth Fairy. He remembers. Usually. He pays well. He is cheerful. But he had forgotten too. I looked at my eight year old and said, “There is no Tooth Fairy. And if you want a dollar it might help if you left the Tooth Fairy a note so she’d remember.”

It gets worse. So much worse. My daughter pulls out a letter from behind her back. “I did write a note.” 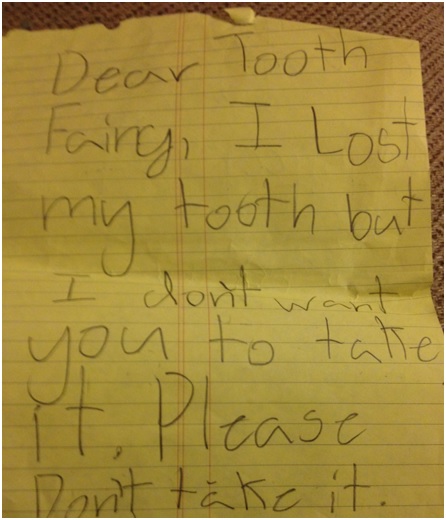 There in her note was a lot of belief and faith and hope in magic. All I could say is, “Check tomorrow morning.” I’m a bad and horrible mom. The next morning my daughter found this note and $1. Guilt does not change the payout. 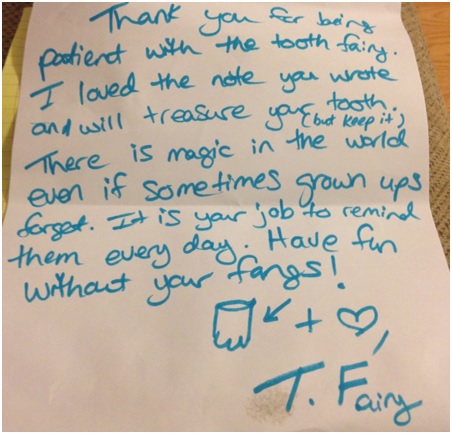 And here is where the story gets stranger. She gets the note and comes running to me the next morning with her face full of joy. I told my daughter there was no Tooth Fairy. I told her the incompetent human playing the part of the tooth fairy was me, the surly mother.

But all my daughter shouted was, “She remembered!”

For some reason she forgot my honesty and lateness and surly attitude. She didn’t need $5 or $20. She is looking for magic. And that’s the worst problem about believing in anything or anyone. It’s when you look for magic and actually find it.