Mellowed out? – Confusion at the ‘Shroom

Mellowed out? – Confusion at the ‘Shroom

A social media posting about the Mellow Mushroom in Decatur caused a lot of confusion Wednesday evening.

The Mellow Mushroom Decatur Facebook page announced that the restaurant would be closing permanently “as of today.”

However, when Decaturish dialed the number, the restaurant sounded very open.

The Facebook post said, in part, “We regret that as of today, the Mellow Mushroom Decatur location has closed. We appreciate your support and loyalty over the years and we look forward to serving you at one of our many other locations.  It is never an easy decision to close a restaurant under any circumstances, particularly after many years in a market.”

The news came as a shock to the people at the restaurant who answered the phone. One of them said, “Holy shit!” when they heard the contents of the Facebook post.

A few minutes later, a man who answered the phone at the Mellow Mushroom said he’d been in touch with the owner about the post and said the restaurant would be open on Thursday. The Facebook post has been removed. 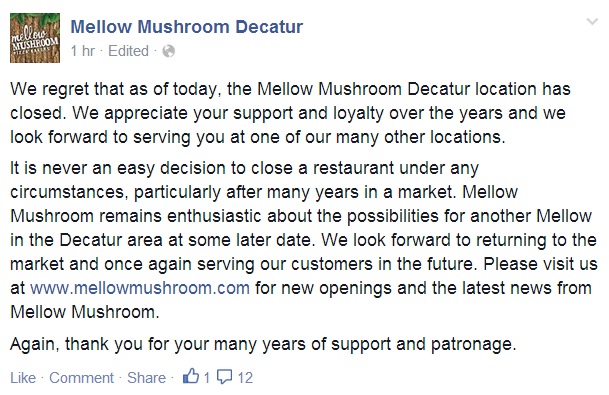