UPDATE: I have received a statement from the Georgia Press Association. They are refusing to take a stand. More details at the end of this post. Also, Times Herald General Manager John Winters has left a response in our comments section, and I have responded to his response.

I hadn’t heard of the Newnan Times Herald in Newnan, Ga. until I caught the newspaper republishing one of my Decaturish.com articles.

The management of the publication freely admits that a Times Herald reporter took my work without my permission and reprinted it in full on www.times-herald.com. I took a screen shot of it before the article was removed on May 11 (click the image to enlarge): 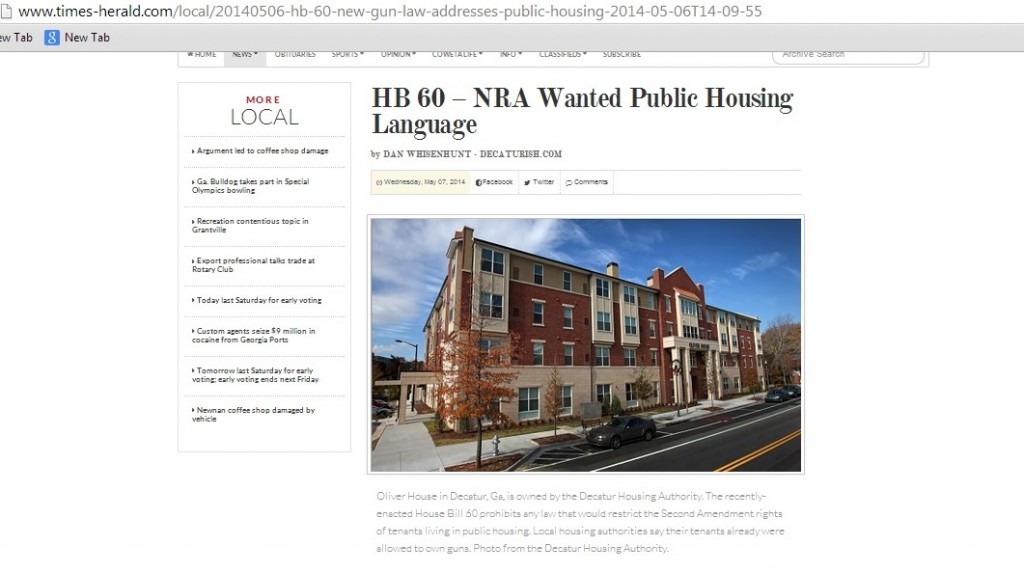 I also saw the article for sale on the Times Herald’s online archives. You would think once I pointed this out to management, they would admit their mistake and issue an apology. I also submitted an invoice to the Times Herald asking for compensation for the unauthorized republication of my work.

I received no apology from management. (The reporter who posted the article did apologize to me, I should note.) According to the Times Herald General Manager John Winters, I shouldn’t be offended because the Times Herald gave me a byline on my own article.

“Most authors, including newspapers, seek to have as extensive circulation of their articles as possible so long as appropriate attribution is provided,” he told me.

By the way, Mr. Winters serves on the board of the Georgia Press Association. I have sent the executive director and board leadership a copy of Mr. Winters’ letter to me.

The Times Herald did indeed attribute the article to Decaturish, but provided no link back to my original piece. The article was more than 700 words long and included multiple sources. I spent several hours reporting it.

So, yeah, I was a little pissed off when I saw the Times Herald using my article to generate page views for their website without a link back to my own. I tried to maintain as professional a tone as the circumstances would allow. I articulated my position in a way that I thought was strong, but appropriate.

Mr. Winters never returned my phone calls and ignored my email until Monday. On Tuesday, he sent the following letter to me in response to the invoice I submitted.

As our newspaper has previously advised, the article in question was posted online with attribution. When you objected to that, it was removed from the website.

Most authors, including newspapers, seek to have as extensive circulation of their articles as possible so long as appropriate attribution is provided.

In addition, our records show that the article received only 30 views while it was on our newspaper’s website. Taking the compensation we receive per view, and multiplying that by 500 times, would amount to a value of $26.25. Therefore, we think that any damage to viewership on your site, as a result of our posting the article, would be miniscule.

Also, any factual material in the article you posted is not covered by the copyright laws. All facts, even comments by persons quoted in an article, are in the public domain.

We look forward to hearing back from you with any additional information you wish to share.

I felt the information that I shared with Mr. Winters was pretty substantive. Much of it is contained in my original invoice (I am omitting the name of the reporter who posted the story, because he at least had the decency to apologize):

From: Dan Whisenhunt, Editor of Decaturish.com

Summary: On May 7, 2014, the Newnan Times Herald republished an article titled, “HB – 60 – NRA wanted Public Housing Language” on www.times-herald.com. On May 10, Decaturish.com received notification that this article had been reprinted. While the article does credit the source, it does not provide a link back to the source. In addition, the article was offered for resale on the Times Herald website via its archives.

I have attached images to support my claims in a separate email to management at the Times Herald.

The 734-word article included interviews with more than three sources, and involved several hours’ worth of reporting. (The reporter) admitted his error in publishing the article. He said in his response, dated May 11, “I originally posted it because I believed it to be a compelling story – believing that as long as I attributed the source and author, it would be acceptable.”

I find that response difficult to believe. I do not think your staff would publish content from the New York Times or the Washington Post on your website without a prior content sharing agreement. I believe my content was republished because your publication considers Decaturish.com (to) be less concerned about protecting copyright than a traditional newspaper and therefore less likely to complain. As you can see, that is not the case.

(Your reporter’s) response shows a blatant disregard for the copyright of other publishers. What (your reporter) either ignored or failed to realize is that Decaturish.com is an online-only business. Our sole means of income is based upon the number of page views the article receives on our website. Any views that are diverted from our website have a direct effect on our ability to charge competitive rates for advertising. Conversely it also offered Times Herald’s website a competitive advantage.

To date I have not received a response from management to my emails or phone calls regarding this incident. That is simply inexcusable. This incident warrants a more substantive response from your publication. I believe a $1,000 is an appropriate compensation for both the time I spent producing this article, and as an acknowledgement of your company’s egregious error in violating my copyright.

If your company does not issue a formal response to me with regard to this invoice, I intend to file a formal complaint with the Georgia Press Association, where Mr. Winters serves as a board member.

I am a member of Georgia’s journalism community. The response I have seen to date is not a positive reflection on your publication. I expect a prompt response acknowledging that you have received this invoice and that you are working to address my concerns.

So why would I share this with you? Well, aside from wanting to show the absurdity of the situation, I also think that Mr. Winters and his organization are taking advantage of my circumstances. Unlike the Times Herald, I do not have connections in the Georgia Press Association or a team of lawyers who can nickel-and-dime people who infringe on my copyright. The only other recourse I have is this website that I have built through my own hard, tedious work.

Mr. Winters seems to think that my status as a smaller publisher makes my copyright less valid than that of his publication. I doubt the Times Herald would pluck articles from its competitors or publications like The New York Times without some prior arrangement. Bigger publications with more resources simply wouldn’t stand for it.

I’m punching above my weight. But that doesn’t mean I won’t fight back.

Mr. Winters and other publishers need a wakeup call. Just because you gave me a byline on your website, it does not make it OK to take my work and use it without my permission. I don’t know what additional information I could provide that will make that any clearer for you.

I hope for the sake of the industry that your peers don’t share your view. We’ll find out soon enough.

UPDATE, 10:17 am on 5/14: The Georgia Press Association has contacted me to let me know that they won’t be weighing in on this issue.

I received this email from GPA President Eric Denty:

He’s correct about that. We do have differing views. I think taking someone’s content without permission is wrong and the Times Herald doesn’t. Here is my response to Mr. Denty:

No one expects to have to take a stand, but sometimes it’s just something you have to do. I am disappointed that you would ignore such blatant misbehavior by one of your own board members. Forgive the cliche, but your silence speaks volumes.

I wish I could say Mr. Denty’s response surprises me, but the truth is that the journalism industry in Georgia tends to circle the wagons whenever it is criticized. The Twitter page for the Georgia Press Association says the organization is charged with, “Promoting the interests & well-being of Georgia’s newspaper industry.”

How does Mr. Denty’s response further that mission? Or does Decaturish not count because it is an online-only publication?

The GPA is taking a pass on a question that should be easy to answer. That should make all journalists and publishers in Georgia very concerned.

LAST UPDATE, 4:41 pm, on 5/14: I would like to thank everyone who has commented here and shared this post. I believe this is an issue that in general doesn’t receive enough attention, and there are clearly people who share my concerns. I’m not satisfied with the responses of the Times Herald or Georgia Press Association because both imply our disagreement is a simple difference opinion. If it were only that, I wouldn’t have raised any sand about it. There need to be clear guidelines about what is and isn’t acceptable practice with regard to the work of other content creators as we confront the challenges of journalism in the digital age. I think GPA is responsible for setting the tone on these matters, but they have declined to do so in this instance. I think it’s a missed opportunity.

I could spend a lot of time grinding my axe about this and not wind up any better off than when I started. But I have communities to cover, and so does the Times Herald, and I’d be doing a disservice to both of them by focusing too much of my time and energy on this one dispute. I would ask that you please stop emailing Mr. Winters and members of the GPA on my behalf. We’ve made our point and got people’s attention. Maybe that was enough to make some people think twice before doing it again. I hope so. 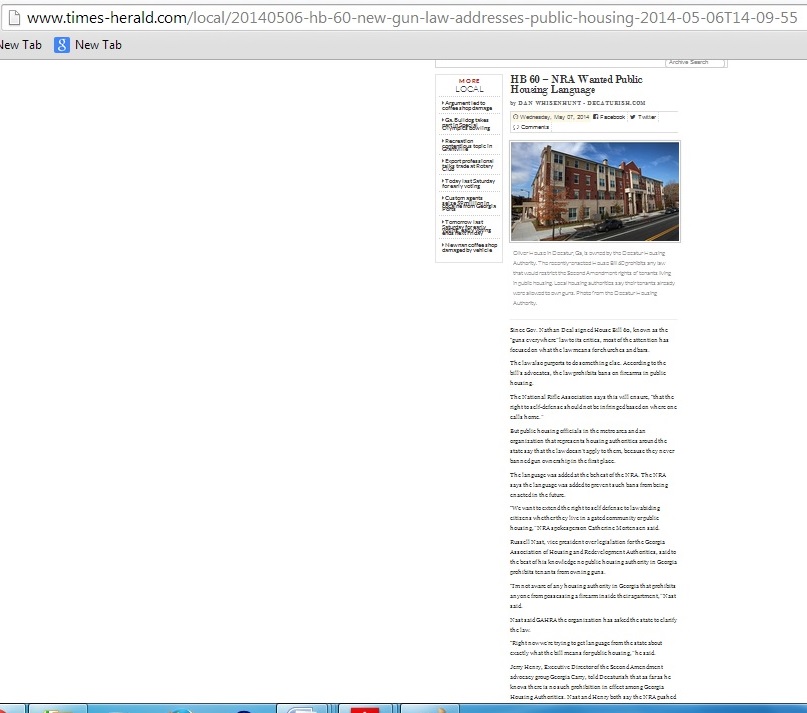