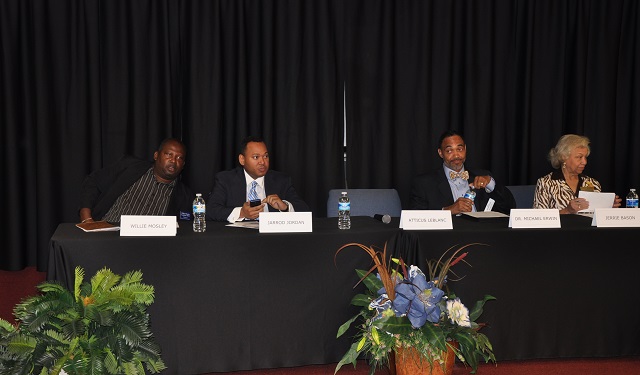 Four of the five candidates running for the District 3 seat on the DeKalb County School Board spent considerable time during a recent forum debating the place of school board members.

The election for the District 3 DeKalb County Board of Education seat, which includes Avondale Estates, is May 20.

Erwin, who was appointed to the District 3 seat by Gov. Nathan Deal, said that board members should be mindful of their roles. His answers came in response to a question about the importance of board members holding town hall meetings.

Jordan has said if elected he will make it his goal to hold more town hall meetings with constituents. Erwin said that board members should be careful to understand how those meetings could interfere with a school system’s day-to-day operations.

Erwin said meetings should be facilitated by staff members who can help answer questions.

“The board stays out of the day to day management of the school system, the superintendent informs the staff,” Erwin said. “I take that list of questions, he gives them to the staff member that is responsible, then I come out with all the staff. So I stay in my lane. That’s the protocol.”

Jordan and other candidates disagreed.

“That’s the difference between someone who is appointed to a school board and someone who is humble enough to ask you for your vote and support,” Jordan said.  “He’s at a meet and greet to say that we shouldn’t engage our citizens. That’s a completely wrong approach. We should be in front of you as much as possible.”

DeKalb County Schools is no longer on probation, which Erwin lists among his accomplishments in his biography.

“Oftentimes all people want is to be heard,” she said. “They’re not looking for answers. We are elected. … We have a responsibility to those who elect us. “It is important to allow constituents a forum for addressing their concerns and their issues.”

“We work for the citizens of DeKalb County,” Mosley said. “Certain questions can’t be answered. But I can assure you is my job is to listen to the citizens.”

Another topic that produced fireworks is the subject of charter schools.

DeKalb County is seeking to become a charter school system, meaning that local schools would have more autonomy. A charter school is a school that has greater flexibility on state mandates in exchange for higher levels of accountability.

A member of the audience asked the candidates if they supported DeKalb becoming a charter system.

“I have mixed view about charter schools,” Bason said. “I think charter schools on the one hand can produce great results, but there are a lot of unknown variables in charter schools. I believe in more flexibility more autonomy. We can achieve that through our current system.”

Bason said she would like to know more about how DeKalb’s existing schools will function once they become charter schools.

Erwin said there would be extensive training for parents and teachers about how a charter model works.

“You have to think about the accountability piece,” Erwin said. “These boards will have to go through a thorough training. The board will review the staff will review how this will look. We do not want our schools to founder. I can understand your concern. The training will be in place.”

Jordan said he was the first candidate in the race to advocate for DeKalb becoming an all charter system.

“There’s a difference between startup charters and conversion charter,” Jordan said.  “(A startup charter is) not where we’re going. All attendance zones stay the same and you will not get to pick and choose which students attend that charter.”

Mosley said he is “totally against” DeKalb moving to a charter system.