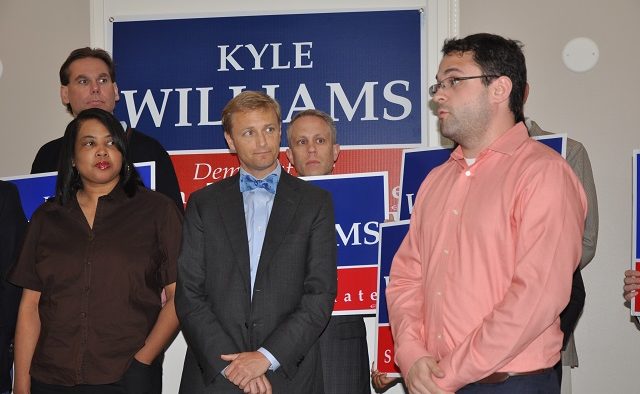 Kyle Williams, center, listens while Ian Sugar, right, Deputy Political Director with the Gay and Lesbian Victory Fund, speaks on his behalf during a May 15 press conference. Photo by Dan Whisenhunt
Share 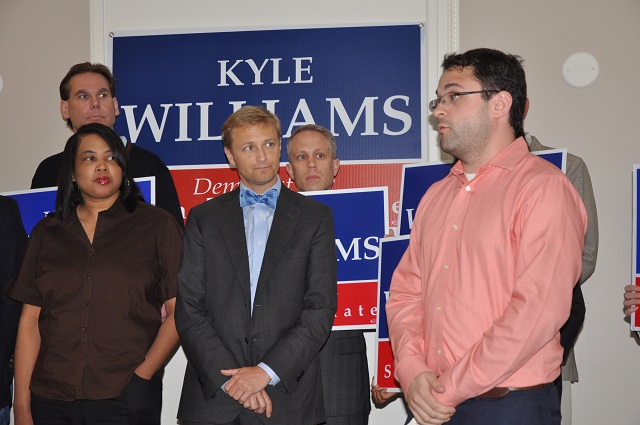 Kyle Williams, center, listens while Ian Sugar, right, Deputy Political Director with the Gay and Lesbian Victory Fund, speaks on his behalf during a May 15 press conference. Photo by Dan Whisenhunt

The two candidates running in the Democratic primary for the Senate District 42 seat are taking their intraparty fight down to the wire ahead of the May 20 primary.

On May 15, Decatur attorney Kyle Williams called a press conference about a recent mailer from former state representative Elena Parent’s campaign.  Both candidates are running to replace state Sen. Jason Carter, who is running against incumbent Gov. Nathan Deal.

The mailer links Williams to the Log Cabin Republicans, a group of conservative gays and lesbians that endorsed Mitt Romney for president in 2012.

Williams received the endorsement in 2009 when he ran for Decatur City Commission.

Williams gathered his supporters at his Decatur office and described the mailer as an affront to gays and lesbians.

“The ad that hit mailboxes yesterday was not an attack of me,” Williams said. “It was not a debate of the issues. It was not a legitimate conversation about voting records … It instead was an intentional act to divide the LGBT community, to pit the LGBT community against itself, and my opponent did it because she knows that she cannot go toe to toe with me on who best represents this district.”

Within minutes of the press conference, Parent’s campaign sent out an email attacking Williams for defending the endorsement of Log Cabin Republicans. The press release quotes state Rep. Karla Drenner, D-Avondale Estates, who is openly gay and endorsed parent.

“This is not an LGBT issue,” Drenner said. “This is a Democratic Primary and this Republican group spews vitriol at Democrats on a daily basis in its news feed. As recently as Tuesday, they posted an article accusing President Obama of ignoring terrorists. I can assure you Elena would never accept the endorsement of the Georgia Federation of Republican Women or the Concerned Women for America.”

The Log Cabin Republicans dispute is not new to the campaign. It was raised back in March, when Williams’ campaign accused Parent of conducting a poll that linked Williams to the conservative group.

It also isn’t the only disputed claim among the candidates.

During the press conference on May 15, Williams said he stands by his initial assessment.

“Votes matter,” Williams said. “Read the article. District 42 does not need someone as its next senator someone who depends on second chances to get the progressive response the first time. She blinked on HOPE, and she took the vote that we say that she took.”

Editor’s note: This story has been updated to include the information that Williams received the endorsement of the Log Cabin Republicans in his 2009 race for Decatur City Commission.