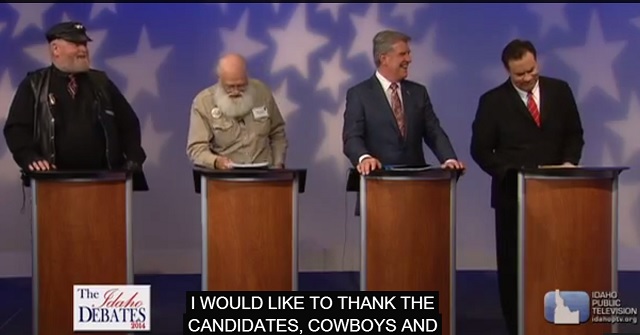 Screen grab of the Republican gubernatorial debate in Idaho, aka the most awesome debate of the decade.
Share

Screen grab of the Republican gubernatorial debate in Idaho, aka the most awesome debate of the decade.

The Republican gubernatorial debate in Idaho is the freakin’ sweetest thing I’ve seen in a while.

Two guys in suits who look like they walked out of a politician factory somewhere.

I’m so jealous of the reporters in Idaho who get to cover this. The May 20 primary debates in Georgia have nothing on debates in the Potato State. I also commend the debate organizers for opening it up to the “fringe” candidates. In real America, people get thrown in jail for homeschooling and get profiled for dressing like a biker.

By the way, the biker candidate says that he’s pro-gay marriage because he drove a taxi in Idaho and “I picked up my fair share of the gay community, and they have true love for one another.”

“I’m telling you, they love each other more than I love my motorcycle,” he adds.