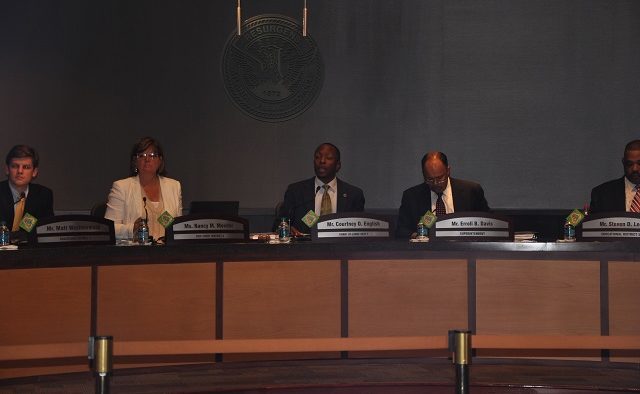 Members of the Atlanta Board of Education at BOE's April 14, 2014 meeting. - File Photo by Dan Whisenhunt
Share

Members of the Atlanta Board of Education at BOE’s April 14, 2014 meeting. – File Photo by Dan Whisenhunt

The Atlanta Board of Education will hold a hearing on its tax rate on June 19 at 6 pm.

The hearing will be held at the Center for Learning and Leadership, 130 Trinity Avenue, SW, Atlanta, Georgia 30303.

The millage rate itself – 21.6 mills – won’t change, according to the Atlanta Journal Constitution. To see the AJC story, click here.

Because of the expected increase in property values, state law requires APS to advertise its millage rate as a tax increase. The city of Decatur and Decatur School Board both recently have held public hearings on the millage rate for the same reason. The City Schools of Decatur Board of Education voted to lower its tax rate to 20.5 mills, but will still be required to hold hearings because property taxes will increase 4.27 percent overall. Decatur’s tax digest is expected to grow by 12.75 percent.

If APS votes to keep the current millage rate, it will mean an overall tax increase of 2.61 percent.

According to the public hearing announcement from APS:

From a historical perspective, the property tax revenues took a steep dive during the recession and are now starting to increase, but still remain well below the highest levels. In FY09, APS property tax revenues amounted to approximately $514 million and then reached a low point in FY13 at $413 million (a 20% decrease). The current APS FY15 budget anticipates that property taxes will be approximately $455 million, subject to a final determination based on the final tax digest which may be slightly lower than the original forecast made in February.