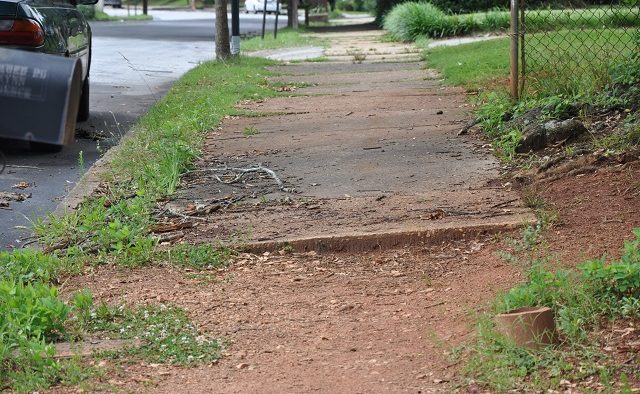 A sidewalk in Kirkwood. Photo by Dan Whisenhunt
Share 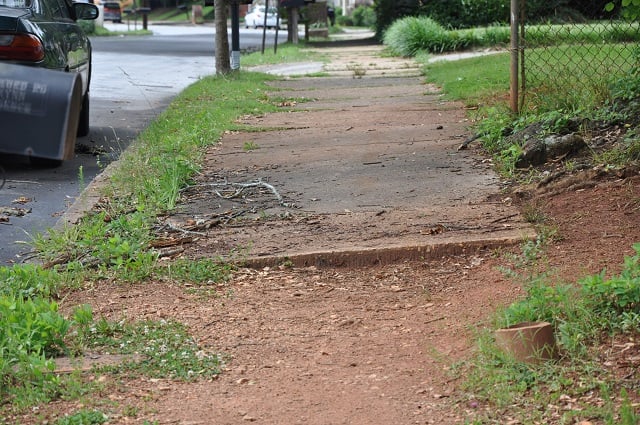 A sidewalk in Kirkwood. Photo by Dan Whisenhunt

The city of Atlanta is considering charging residents more for installing sidewalks along city streets.

Some residents in Atlanta’s Kirkwood community say the increased costs of sidewalk repair should be a city responsibility.

“It’s a short-sighted repair that won’t work,” Earl Williamson said. “It’s trying to put something on the shoulders of residents that the city should’ve done across decades.”

Flocks said for years neighborhoods have raised money for crucial sidewalk repairs. Increasing the costs to residents by 164 percent will put the cost of a sidewalk out of reach for many Atlanta communities, she said.

“It’s going to be too much for neighborhoods to be able to gather that money from a lot of people in the neighborhood,” she said.

Flocks said that damage to sidewalks occurs from things like utility work or tractor-trailers parking on residential streets.

“The city program is very unfair. It doesn’t work,” Flocks said. “A lot of the damage to sidewalks is coming from things beyond the property owners’ control.”

Atlanta City Councilwoman Natalyn Archibong, who represents Kirkwood and chairs the city’s Utilities Committee, said the ordinance currently is being reviewed by Neighborhood Planning Units. She said she expects “a lot of push back” from residents.

“I am not in support of increasing those fees at all,” Archibong said.

NPU-O was supposed to discuss the ordinance at its last regular meeting, but a representative from the city didn’t show up to discuss it.

Archibong said the city needs to look at “best practices” and see if there’s a better way for the city to handle sidewalk installation before increasing fees on residents.

“We’ve got some work to do on our side before we go to the citizens and say, ‘Pay more,'” Archibong said.