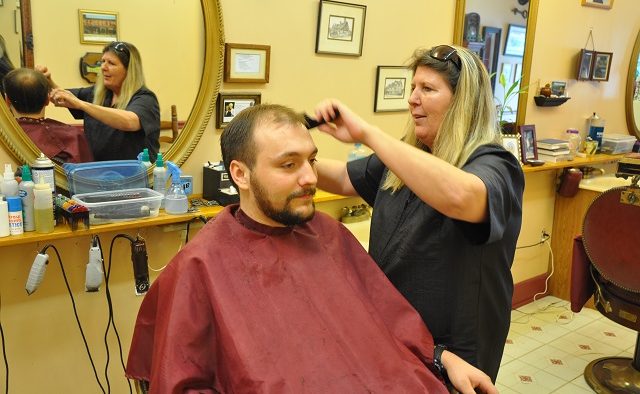 FILE PHOTO FROM 2014: Lisa Whiddon cuts the hair of longtime customer John Washburn. Photo by Dan Whisenhunt. This photo is being used for illustration purposes.
Share 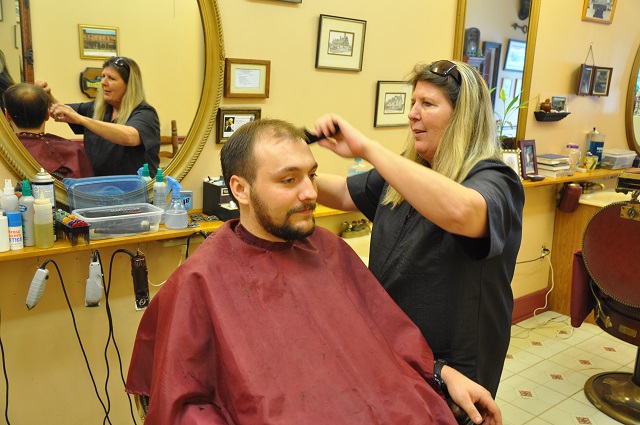 A few months ago, they came close to losing it.

The Graves family barbershop, now known as the Brass Chair Barber Shop, opened 45 years ago in downtown Atlanta. It operated out of the Candler Building, but relocated to the Tudor Village in Avondale Estates in 1997.

Three years ago Graves died, leaving Whiddon to run the business alone. Burkowsky worked as a barber in Chamblee until a few months ago. Whiddon hurt her wrist in an accident and closed the shop for a while. The company started losing business.

“She said, ‘You’re going to have to come over here, because if you don’t we’re going to end up losing the shop,'” Burkowsky said.

Burkowsky came back to her family’s barbershop, leaving behind a clientele she’d acquired over seven years in Chamblee, though some customers followed her to Avondale.

The barbershop, notable for its antique brass chairs, was deeply important to their father.

“We’re just hoping to keep the legacy of my father,” Burkowsky said. “He always said, ‘Oh I don’t have nothing to leave y’all except the barbershop,’ but really he taught us the trade. He apprenticed us in barbering, me and my sister, and he left us a barbershop where we can make good money for the rest of our lives, which I thought was a great gift for someone to leave kids.”

Graves collected antiques throughout his career. Before he opened the store 45 years ago, he bought the brass chairs from the old Florsheim Shoe Store and Barbershop, where Central City Park sits today, after a fire destroyed the building.

“My father used to work there,” Burkowsky said. “My father went in and put a bid on the equipment before the insurance adjuster got them.”

Burkowsky and Whiddon aren’t sure how old the chairs are, but know that they weren’t manufactured after 1910 or so.

The chairs have little footrests. Back in the day, the shoe shine man would put a piece of newspaper on it for customers while he polished the shoes.

It’s also different layout. Modern salons are a little roomier, but the Brass Chair is shaped like a long hallway, with the chairs in a row in front of the mirrors.

The sisters say they don’t plan to expand. Perhaps they’ll hire another barber at some point, but they’re happy with what they have now.

That goes for the customers, too.

John Washburn grew up in Avondale but now lives in Marietta. Every couple of months he makes the trek back to Avondale to the only barber he’s used since he was a kid.