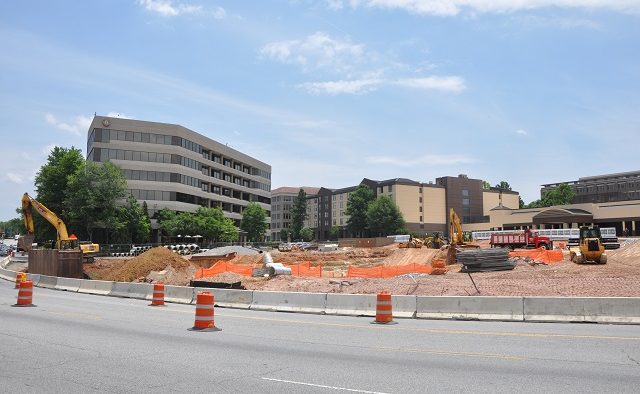 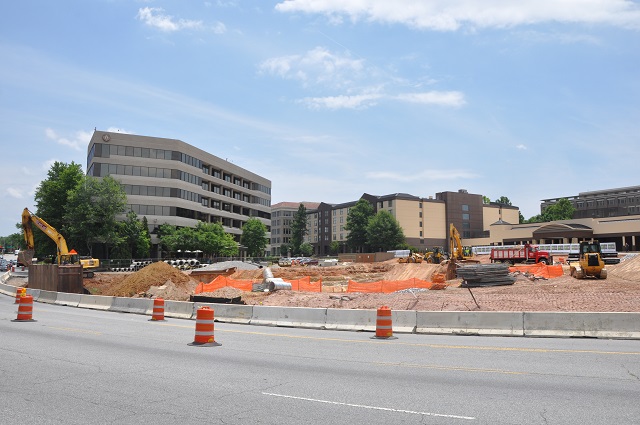 Construction crews have been busy at the site a luxury apartment development at 160 Clairemont, across from the Fidelity Bank building in Decatur.

The apartment project is being developed by Paces Properties in partnership with Trammell Crow Residential.

Lyn Menne, Decatur’s Assistant City Manager in charge of Community and Economic Development, said the construction crews are building a parking deck that will be at the center of the development.

“They are building the parking deck first in the center of the old surface parking lot,” Menne said. “It will serve the office building and the new apartments. Once it is finished and the office tenants can start using it, they will begin on the apartments that will front on Commerce Drive.”

“We’re under construction and the ultimate goal is to build 167 Class A multifamily units,” he said.

But, wait a second. Wasn’t that originally supposed to be 176 units?

Wood said it was 176, but the developer decided to cut back on the number of units in exchange for more space in individual residences.

“We answer to many masters and in discussions we decided it was more appropriate to have a few more two bedrooms and we adjusted the unit count down,” Wood said.

Wood said people driving on Commerce won’t see the parking garage when the project is finished.

The development of the apartment project at 160 Clairemont has pushed drivers along Commerce Drive into a single lane as crews work on the site.  Drivers might want to get used to that, because eventually the road will go on a diet. As first reported by Decatur Metro, the road will get bike lanes and be narrowed down “to match the streetscape in front of Allen Wilson terrace.”

Wood said the city will be responsible for narrowing the road and adding the bike lanes.

“The thought is it’ll be a traffic calming measure,” he said.

The Clairemont project is gaining steam, but a project at 315 W. Ponce has been underway for several months. The Place on Ponce, being developed by Carter USA, will have units available to rent this fall. Rents at that apartment development will start at $1,100 and go as high as $2,500.

There hasn’t been movement yet on the Trinity Triangle project at the intersection of East Trinity Place and East Howard Avenue, but Menne previously said that crews should break ground in late June or early July.