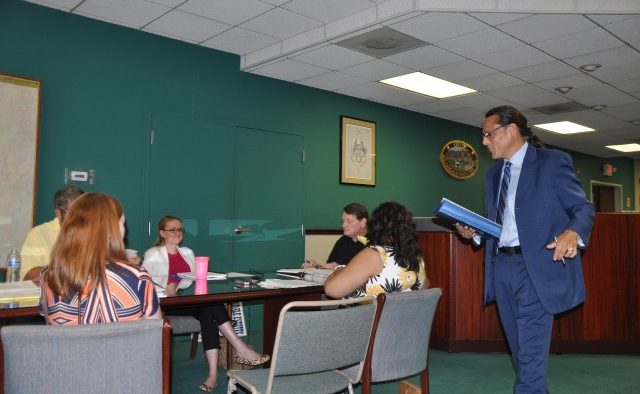 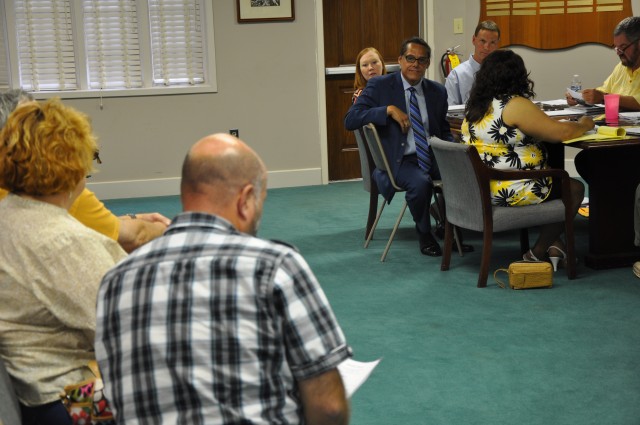 During the June 18 Avondale Estates City Commission work session, Tony Longval, center, took questions from residents about his plans for the Towne Cinema space in the city’s downtown. Photo by Dan Whisenhunt

Tony Longval told Avondale Estates residents on Wednesday that owning a theater has been “a lifetime dream.”

Longval wants to make that dream a reality in Avondale’s historic downtown. He’s applied for a conditional user permit application to turn the Towne Cinema building into the Avondale Theatre.

He attended a work session on June 18 and took questions from the public. Residents sounded cautiously optimistic about the plan.

The big question was whether the music venue could devolve into a night club, something the residents said they do not want.

“We want to make sure that it doesn’t become a disruption for the residents and the other people that live nearby, and as long as there are conditions attached to the final agreement, it’ll be great,” resident Lisa Shortell said.

Longval said residents won’t have to worry about the venue becoming a rowdy nightclub.

“It’s not going to happen,” he said after the meeting. “That’s not what I’m here for.” 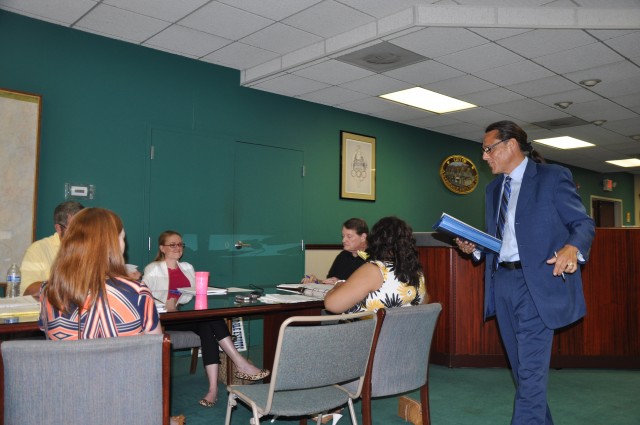 Longval has been a roadie for decades and has spent the last seven and a half years as a drum tech and “merch guy” for the band Sister Hazel. He said the band is fully supportive of his idea. He said he has three investors backing his three phase project.

During the work session, he told commissioners the first phase will take six to seven months. He wants to restore the theater’s balcony, which has been covered up in its prior incarnations. He said he’s worked for bands that recorded albums at the theater back when it was a recording studio.

He wants to turn the upstairs room adjacent to the building’s iconic sign into a speakeasy, serving tapas and cocktails.

Longval thinks he can transform the theater into a national, world-renowned venue.

Commissioner Terry Giager asked if the building would have sound proofing.

“Some of the best in the world,” Longval said.

Giager also asked about Longval’s request to operate from 11 am to 2 am, Monday through Sunday.

Longval said he asked for the time to give him options to hold events at the theater. He said the acts will be mostly acoustic, calling it an “unplugged, intimate setting.”

In addition to musical acts, he wants the theater to host broadway style shows and wants to install a screen so the theater can show movies.

“It’s well rounded,” Longval said. “It’s not going to be open every day,”

Commissioners said they were impressed with Longval’s enthusiasm.

“I’m excited that you’re considering our town,” Giager said. “If everything comes off like you’re saying, it’ll be really good for our city.”

Fisher Paty, with building owner Oakhurst Realty Partners, had said he didn’t want to lease the space to just any tenant. It had to be someone with “vision.”

Paty showed up to the meeting in support of Longval’s application. He does have vision, Paty said.

“Definitely,” Paty said. “We’ve been really patient waiting for the right group that is right for the building and right for the community, so we’re really excited about it.”

Commissioners will consider approving the application at the commission’s June 23 meeting, which starts at 7:30 pm and will be held at City Hall, located at 21 North Avondale Plaza.