APD quiet about search for driver who hit cyclist

APD quiet about search for driver who hit cyclist

It’s been more than a week since Atlanta Police seized a vehicle that they suspect was used to attack a cyclist on June 9.

That Dodge Nitro will be a key piece of evidence that could lead police to the driver accused of intentionally running down Greg Germani, a Decatur resident. The incident occurred on Flagler Avenue in Atlanta’s Piedmont Heights community. The driver faces a charge of aggravated assault.

Germani remains in the hospital, but recently left the Grady ICU for a private hospital in Midtown.

If police have made any progress finding the suspect, they’re keeping that information close to the vest.

For several days, readers have asked for updates in the case. Each inquiry receives a polite and prompt reply from APD communications officers.

“We are not releasing details regarding the investigation,” Sgt. Greg Lyon said on July 1. “They are being very thorough and that takes time. As soon as we are able to release additional info, we will.”

“The police have not disclosed anything specific to us, but they have indicated that they feel comfortable about the way the investigation is proceeding,” John Germani said. “We hope to have some good news on this front very soon.”

Germani remains on a long road to recovery, according to girlfriend Beth Anne Harrill.

“When I say that Greg has a long haul, this is no exaggeration,” Harrill wrote on her Facebook account. “There is so much unpredictability about a brain injury, but the consistent word is that Greg will recover on his own timetable.”

The cycling community was incensed about the incident, and there was an outpouring of contributions to a reward fund for information that would help police find the suspect. The fund generated dozens of tips.

“So many of you want to help and all of us are so appreciative,” she wrote. “But know this: there will be opportunities to help Greg, not only now, but, in many ways, more importantly, three, six, nine months from now.”

There will be a benefit for Germani on Saturday, Aug. 2, starting at 7 pm at the Star Bar. The admission price is $10. Here is the flyer: 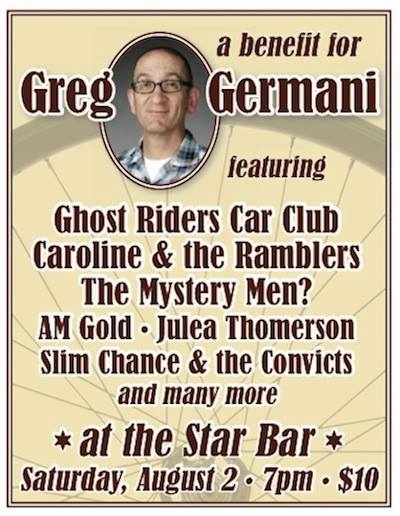