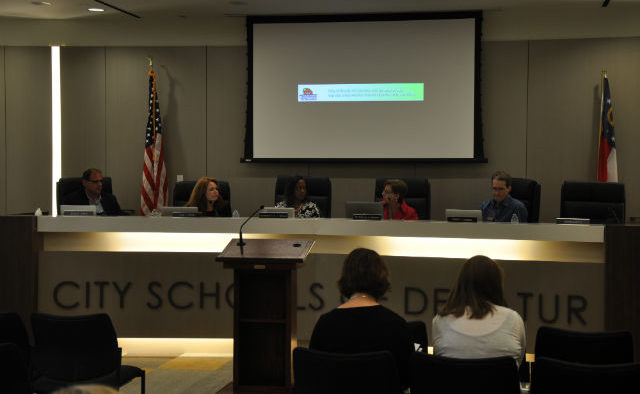 The City Schools of Decatur Board of Education holds its first regular meeting in its new board room at the Beacon Municipal Center. File Photo by Dan Whisenhunt
Share 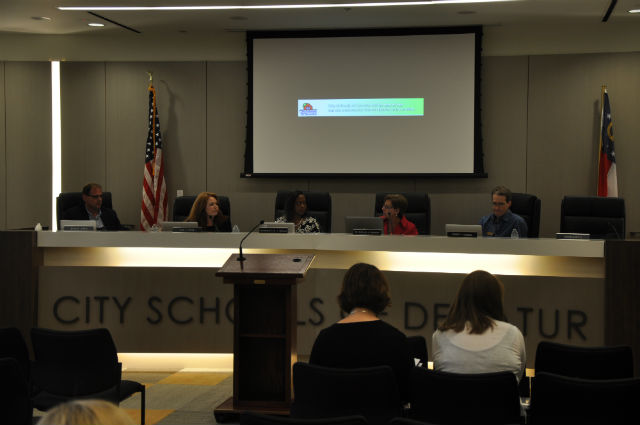 The City Schools of Decatur Board of Education holds its first regular meeting in its new board room at the Beacon Municipal Center. Photo by Dan Whisenhunt

The Criterion Referenced Competency Tests will no longer be used to measure student performance, but let the record show that City Schools of Decatur tested well.

Joseph Austin, Director of Assessment and Accountability for CSD, recently released his interpretation of the most recent CRCT results.

He said he looks at the numbers two different ways: the overall meets-exceeds rate and the mean scale score.

“Obviously we’re near the top,” Austin said. “We’re well ahead of the state as an average. We rank near the top in most subject areas and in most grade levels.”

Here are the rankings Austin calculated for CSD compared with other systems, using both the mean scale score and meets-exceeds rate.

This year, the state’s public schools will switch to the Georgia Milestones Assessment system.

Austin will give a presentation on the CRCT scores at the Board of Education’s July 8 meeting. Superintendent Phyllis Edwards also will give an update on CSD enrollment for the 2014-2015 school year.

Currently, the Kindergarten classes have five more students than the projected enrollment, according to Edwards’ report to the School Board.

“We continue to monitor enrollment and the report is attached as well,” Edwards report says. “Please know that even though it is summer, emphasis is still on efforts to ensure residency when enrolling as well as once students have been seated. It appears from a preliminary check that Kindergarten numbers are above the projected enrollment figure of 375. Oakhurst remains our largest school at 459 students with Winnona Park following behind at 353.”

The July 8 City Schools of Decatur Board of Education Meeting starts at 6:30 pm and will be held at the CSD central offices, located at 125 Electric Avenue. All meetings are open to the public.

UPDATED at 9:41 pm: Several readers had follow up questions for Austin. Decaturish.com forwarded those to him and received the following answers.

Puzzled asks, “Are the 3rd graders smarter than the older students or is something working less well as the kids move up into higher grades?”

A: Due to varying curricular standards and the design of the assessments comparing scores between grade levels would not be a valid way of evaluating student achievement.

Mike asks, “1. For the meet-exceed, what is the total number of schools evaluated for each class? 2. For the scale score, what is being averaged? All scores within a grade level?”

A: There are 180 districts.  The mean scale score is an average of all scale scores in a subject area for a grade level.

Ben asks, “Why is he using mean instead of median? I don’t know the distribution of scores but I would think that median and standard deviation (or interquartile range) would be better.”

A: His question is valid because median scores can account for outliers, but the state does not provide the median.