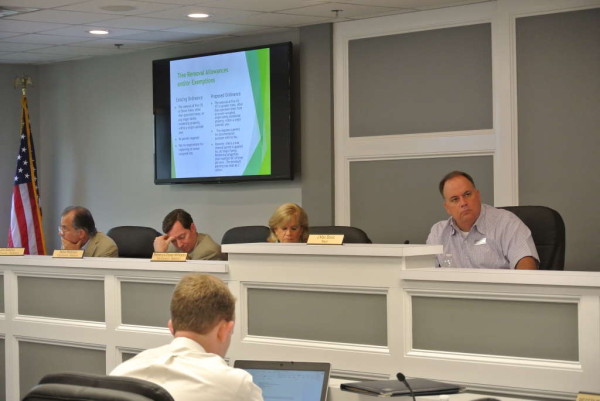 Mayor Davis and Council listened to the summary of a new Tree Ordinance draft during a Special Called Work Session. Photo provided by the Brookhaven Post, CCA member.

(CCA) – Brookhaven, GA, July 16 – The City of Brookhaven is crafting its own tree ordinance – one that officials say can be more easily understood and more targeted to preservation, according to the Brookhaven Post. The city is currently operating under a tree ordinance the city assumed from DeKalb County when the city incorporated.

Mayor J Max Davis said the city intended to change the tree ordinance when they adopted it, just as the city has done with a number of other ordinances – making them unique to Brookhaven. City leaders say they have been working on the new tree ordinance since February.

Councilwoman Rebecca Chase-Williams said that in crafting this new ordinance, it was imperative to make it understandable.

“We wanted to make sure with this we were absolutely clear and do the best job we could to preserve our tree canopy…but also have sensible regulations and respect property owner rights. The goal is to have a healthy and rich urban forest,” said Williams.

Brookhaven’s City Arborist, Kay Evanovich, together with Consultant/Arborist Teresa Eldredge, summarized the finer points of the new Tree Ordinance in a presentation delivered to City Council during a work session Tuesday.

“The current ordinance in DeKalb County is constructed to deal with large tracts of land,” said Eldredge. “We felt like the new ordinance should be crafted for a smaller area that could be looked at lot by lot. When you talk about a city you go to a different perspective, one that’s smaller.”

Residents of the city recently asked for a moratorium on tree cutting due to rapid pace of development. The city of Decatur recently went through a similar exercise, and adopted a new tree ordinance in May.

Copyright Creative Content Alliance. This material may not be republished without permission of the CCA.