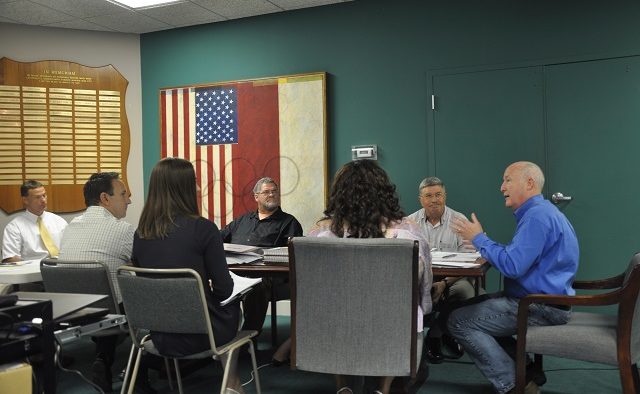 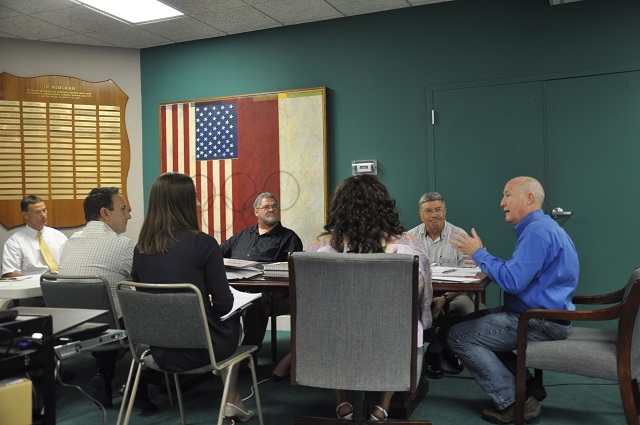 Avondale’s Historic Preservation Commission appeared at a “mandatory” meeting of the Mayor and Board of Commissioners on Wednesday.

City commissioners said they appreciate the work HPC does, but they’ve been receiving complaints about the way members respond to requests from residents.

By the end of it, there was an agreement that the city’s historic preservation guidelines need updating. But commissioners defended the way they enforce the current standards, saying their decisions aren’t subjective. The standards are what’s keeping Avondale Estates Historic District on the National Register of Historic Places.

Mayor Ed Rieker has been attending Historic Preservation Commission meetings recently. He spoke up on behalf of Betty Jones, a resident who wanted to replace a window in her home on Lakeview Place. The commission granted her request.

During Wednesday’s meeting, Rieker said the board’s approach has rankled some members of the community. He said there is “no historic preservation police” in the city.

“We’re really there to help people understand what it is they can do to meet those guidelines,” he said. “I know your board says ‘yes’ to most things. I want to make sure in the ‘yes’ we’re giving them, that ‘yes’ contains all the neighborly aspects we expect in Avondale in terms of how we say, ‘yes.'”

Other commissioners weighed in, saying they’ve heard similar complaints about the board. Commissioner Lindsay Forlines said she agrees with the mayor. She said the accelerated pace of development in Avondale will mean more potential conflicts between community members and the HPC.

“I don’t want to see us getting to the point where Decatur got where they had this big divide over new construction,” she said. “What ended up happening, they got a lot of developers to get on the ball and go ahead and get projects started. Government can have all these unintended consequences.”

Rieker suggested that the board could be a little less picky about certain matters. Replacement of windows in the city’s Tier 1 historic designation is a common complaint, city commissioners said.

HPC members they understood the concerns, but said that it is inevitable that some residents will be unhappy with their decisions.

“We’re kind of caught between a rock and a hard place because the rules that are set forth in our guidelines,” HPC Chairman Jim Glover said. “To say we need to be more lenient on the windows, it’s not that easy.”

Glover said in many cases people are making alterations to their historic homes without going through the HPC. He said there are no consequences for people who make unapproved changes.

“If someone goes beyond the process or aside from the process, we would like to put in place some type of fines, some type of reversal into the guidelines or into the ordinance,” Glover said. “That would really help.”

Another HPC member, Angela Threadgill, said there is an annual report city staff is required to fill out regarding the board’s activities. She said commission members voted to create a committee to develop a user-friendly guide for replacing windows in historic homes.

“If the commission is following the guidelines then we are not acting subjectively,” Threadgill said. “That is an objective review. Maybe we can … better explain how things are meeting the guidelines. If we deviate from the guidelines, there should be an extenuating circumstance.”

Threadgill also suggested the city commission appoint a liaison to the HPC to keep other commissioners in the loop about the HPC’s activities.

Glover said updating the HPC guidelines would also help members keep up with the pace of development.

“Of course, the guidelines need to be updated with the times,” he said. “We need them to be more receptive to what the residents are looking for. That’s why we’re pushing to have it updated, not only historic preservation guidelines, but architectural review guidelines as well. We’re going to have a lot of activity sooner rather than later. We’ve got to be prepared for that.”

Glover asked the city to set aside some money to pay for the updates in its next budget. Rieker said he’d have city staff look into it.

“I hope this was helpful,” Rieker said at the end of the meeting with the HPC.

“I think we need to do it more often,” Glover said.