Ed Rieker with the owners of The Market in Avondale. Source: https://www.facebook.com/aetudorsquare

The building will be located at 10 North Clarendon Avenue. Tomorrow’s News Today notes that the space was formerly home to the Thumbs Up Diner. The Market is planning to open in September, according to its newly-created Facebook page.

The Market in Avondale joins the Watts Whiskey Distillery and the Garage Door Studio. According to the company’s website, Rieker is still looking for a restaurant to move into Tudor Square, located at 119 Center Street.

“The restaurant will join an exciting, energetic culinary community at the heart of Avondale Estates and will enjoy one of the finest restaurant spaces in the city,” The Tudor Square website says. “The 2,300 square foot restaurant space also includes over 1,000 square feet of additional potential outdoor seating.”

According to property tax records, Rieker owns four parcels downtown, which he purchased in June 2013 for $539,800.

Here is a Google Map showing the specific parcels owned by Rieker in downtown Avondale: 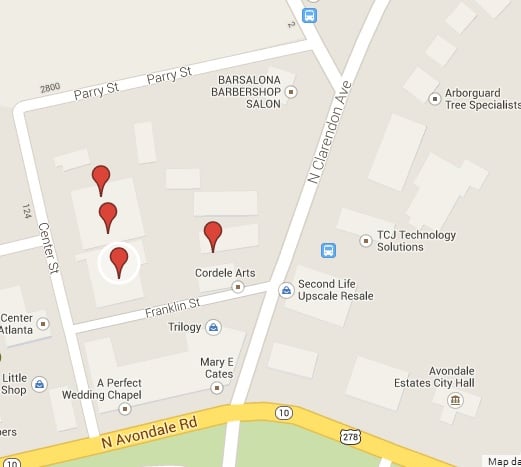 Each property owned by Rieker is noted with a red marker. Source: Google Maps. (Note, this map clarifies an earlier version posted this morning. The the bottom red marker on the left was a notch too far to the right in the initial version of this map because of the way Google rendered the addresses.)