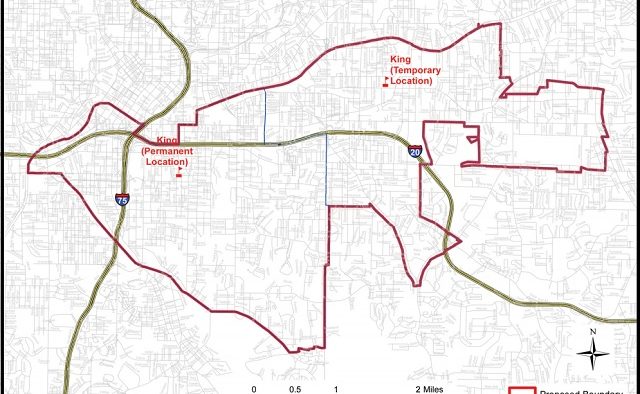 A new map released by APS shows the attendance boundaries for the new King Middle. Source: Talk Up APS.
Share 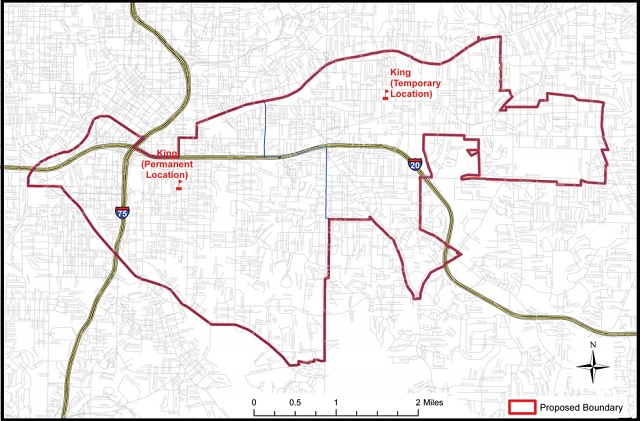 A new map released by APS shows the attendance boundaries for the new King Middle. Source: Talk Up APS.

Atlanta Public Schools has published new details about a plan to combine Coan and King Middle Schools this fall.

Atlanta Board of Education members voted in April to close Coan and merge it with King Middle due to low enrollment at both schools. During the first two years of the merger, all students would attend classes at the original Coan campus, Superintendent Erroll Davis said. While the students are at Coan, King will receive a $10 million to $20 million renovation. Students would move back to the King campus in August of 2016.

A system communications officer discussed the Coan-King merger on the Talk Up APS blog.

According to Talk Up, “Superintendent Erroll B. Davis announced in June that additional resources have already been designated to King for foreign language study in Spanish, French and Chinese as well as in the performing arts.”

The new King Middle will be the feeder school for Jackson High. APS has created three teams to lead the transition, according to Talk Up APS.

– A community transition team made up of parents and “partnership representatives” from all Jackson cluster schools.

– A team made up of district representatives that will tackle curriculum, finance, security, communications, facilities and transportation.

APS will also hold a get together for parents later this month on July 22 – 24 at the school’s temporary location at 1550 Hosea Williams Drive, NE.  For a complete schedule of events, click here.