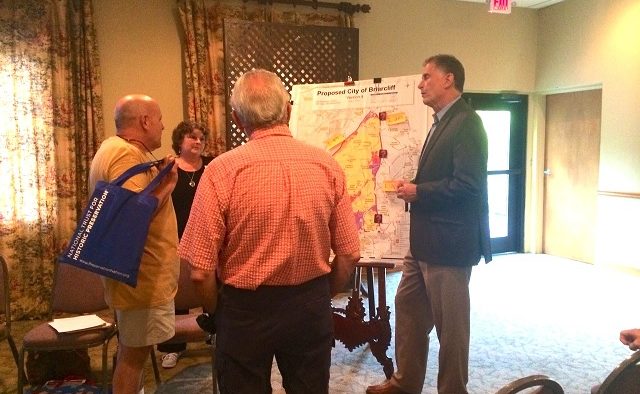 Resident members of the Lindbergh-LaVista Corridor Coalition met at Westminster Presbyeterian Church on July 9 to discuss the merger of the Lakeside and Briarcliff cityhood initiatives. Photo provided by Atlanta INtown.
Share 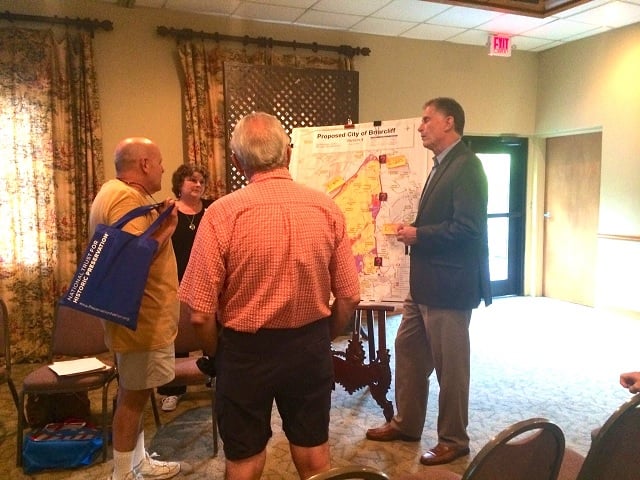 Resident members of the Lindbergh-LaVista Corridor Coalition met at Westminster Presbyeterian Church on July 9 to discuss the merger of the Lakeside and Briarcliff cityhood initiatives. Photo provided by Atlanta INtown.

When officials from the Briarcliff and Lakeside cityhood initiatives announced at the July 2 DeKalb Government Operations Task Force meeting that they were joining forces – “dating” (not married or engaged) in the words of Lakeside Chairwoman Mary Kay Woodworth – there was little detail about how the relationship would unfold. The couple’s first date was an awkward one as representatives from the merged cityhood movements spoke at the July 9 Lindbergh-LaVista Corridor Coalition (LLCC) meeting.

To carry the analogy further, it was basically The Breakfast Club – enemies thrown together in a social setting and warily talking out their differences to find common ground. Whether this will end with someone fist-pumping the air to “Don’t You Forget About Me” remains to be seen, but what is certain is that if the partnership between Briarcliff and Lakeside holds, those names will disappear and a new one will be chosen to represent the merged north DeKalb County territory. It also means going back to the drawing board and creating a new map.

At the end of this year’s Georgia legislative session, the three competing cityhood movements – Briarcliff, Lakeside and Tucker – found their efforts tabled over boundary disputes. A last minute effort to merge the Lakeside and Tucker plans was – here’s another analogy – an arranged marriage that neither side really wanted, but accepted in hopes of getting any kind of action at the capital. With the dust settled, Tucker is now on its own, there have been shifts in the behind-the-scenes players for both the Briarcliff and Lakeside movements and there is – at least in this early phase – a willingness to get this couple to the altar.

But before their are any wedding bells – or a referendum on the ballot – the combined cityhood initiatives are going to have to convince residents in both territories that the merged groups are viable and inclusive.

Editor’s note: This article was provided courtesy of Atlanta INtown via a mutual agreement to share content about this story.