New region, a new season – DHS football is near

New region, a new season – DHS football is near 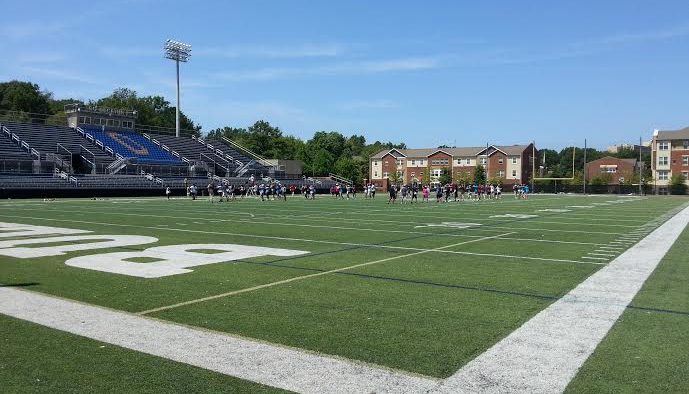 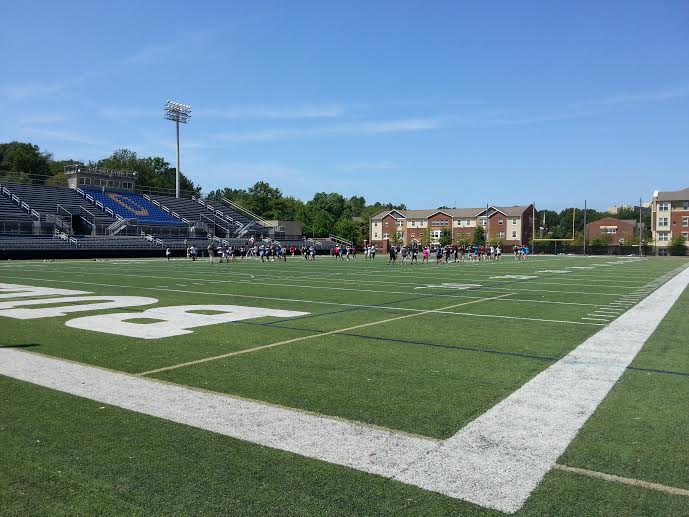 By the narrowest margin Decatur missed a tragic prologue to its 2014 football season.

During a three-on-three spring-practice tackling drill in May, freshman (now a sophomore) sensation Dennis Bell broke his fifth vertebra, roughly a quarter inch from the spinal column. He wore a neck brace for weeks, took three pills daily and was barred from contact sports, meaning he missed all summer workouts.

But the outcome could’ve been far worse.

“He’s just a very lucky young man,” said Decatur head coach Scott Jackson, who begins his third season at the school and second as head coach. “I went to the emergency room with him and saw the x-ray. He broke the tip of the vertebra. If it had broken within the spinal column he’d be paralyzed.”

Bell showed up Monday for the first full week of pads-and helmets workouts as Decatur prepares to open its 97th football season. This much is certain: on Thursday Jackson reprises “Midnight Madness,” a full-dress practice from midnight until 2 a.m. Friday.

On August 15 the Bulldogs play a 7:30 p.m. scrimmage against Our Lady of Mercy at the DHS Stadium, with the official season opener against longtime rival Woodward August 29, also at 7:30.

But what remains unanswered for now is how fully the Bulldogs’ star wide receiver/cornerback has recovered from his harrowing injury.

“I feel good,” Bell said. “I’m out of shape, but I’m ready to get started. I know how close I came to getting paralyzed, and I’m told [his fifth vertebra] will never be as strong as it was. But I’ve been cleared for contact.”

Decatur is coming off a 7-3 campaign, its first winning season since 2010 and only the second winning season in the last eight. Despite the glittering record, which included a stunning double-overtime 31-28 victory over then 10th ranked and eventual Region 6-AAA champions Blessed Trinity – Decatur’s first victory over a ranked opponent since 2005 – the Bulldogs barely missed making the state playoffs for the first time since 2004.

Jackson’s goal is to build off last season’s most blissful moments as the school moves into Region 4-AAA for the next two years. After practice earlier this week, he made it clear he wants no part of the program’s roller coaster tendencies in the decade prior to his 2012 arrival as an assistant to Brad Waggoner, now Director of Recruiting at Georgia Tech. That span includes losing seasons in 2006 (2-8), 2007 (3-7) and 2011 (4-6).

“A big part of winning,” he told his team Monday, “is discipline, which includes always – and I mean always – being on time. I want you here at 10:30 p.m. sharp for [Thursday’s] Midnight Madness.”

But when a younger player asked if that met “10:30 in the morning or 10:30 at night,” Jackson gave an incredulous stare before shaking his head and saying, “Fellas, we have long way to go.” 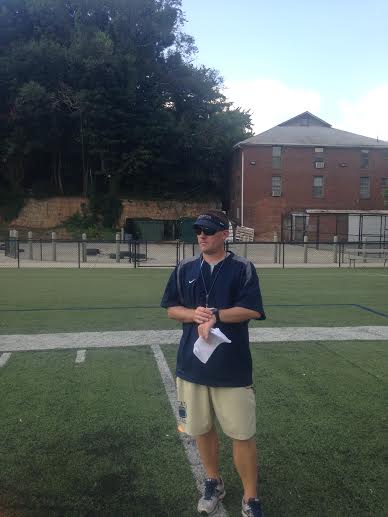 Perhaps, however, not as far as he’d have you believe. Jackson has 50 in camp this week, up from the 35 or so he finished the season with in 2013. He lost only 10 seniors and returns almost all of his players at the skilled positions.

That includes the phenomenal Bell, who didn’t get his first reception until the season’s fourth game against Clarkston. From then on he finished with 22 catches for 503 yards, a blazing 22.9 yards per reception.

His signature play came in that Blessed Trinity game, an 85-yard TD pass from quarterback Devonte Carter, where Carter threw a perfect 25-yard spiral. Bell did the rest, or as he said after the game, “I turned on the jets.” 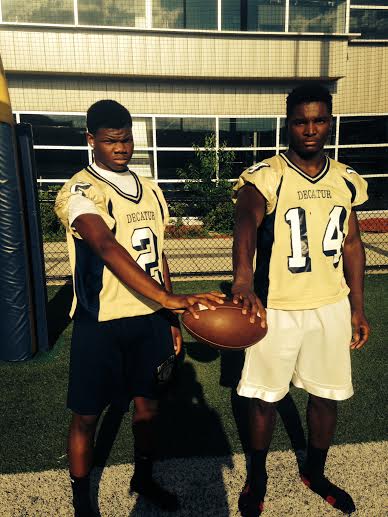 Senior quarterback Devonte Carter (#2) on the left and sophomore wide receiver Dennis Bell (14) on the right. Photo by Bill Banks

How good can Bell get? Decatur’s last outstanding wide receiver was Terryon Robinson (Class of 2013), who caught 41 passes for 562 yards (13.7 per catch) last fall as a freshman for Western Carolina. Last week he was named to the preseason All-Southern Conference team. When asked during last year’s Christmas break to compare himself to Bell, Robinson replied, “There’s no comparison. Dennis is gonna be so much better than I ever was.”

There are caveats here. Jackson says Bell’s “attitude needs to get stronger,” and senior quarterback Carter added, “Dennis needs to learn there’s 10 other guys on the team. It’s a team game, and it’s my job to make sure he understands that.”

Carter has been the Bulldogs’ predominant starting quarterback the last two seasons. His improvement was steady over the first year-and-a-half, but in the last five games of 2013 he was a force of nature, completing 58 of 90 passes (64.4 percent) for 985 yards, an impressive average of nearly 17 yards per completion.

Jackson will have to replace three of five offensive line starters and this may dictate, at least in the early going, less passing. The Bulldogs will run more of a spread offense because, as the coach says, “we’re so young up front we have to keep [opponents] from bunching up in the tackle box.”

“We’ve got more slasher/speed-type running backs,” he added, “as opposed to last year when we had guys who could pound you. I would guess right now we might [throw/run] 50/50 with a lot of [passes] being screens or quick hits to the backs.”

But it’s hard to imagine Decatur not throwing longer – or “going vertical,” as Jackson says—as the season progresses. Given Carter’s increased range over the final half of last year, given Bell’s “jets,” given senior wide receiver Andrew Young and the addition of sophomore wide out Terrill Hall, whose athleticism nearly equals Bell’s, almost certainly the pass will become a potent weapon.

Veteran backs Elijah Rachell and Trey Tice, along with sophomore Grant Walker will keep defenses from focusing on the pass. Walker, though inconsistent, had several dazzling moments last year as a freshman. He has a particularly high ceiling.

The defense will be anchored by 6-2, 230-pound senior middle linebacker Demetrius Harris, who said this week “I’m as healthy as I’ve ever been” after two shoulder surgeries (a loose rotator cuff in both) and foot surgery in the off season. Harris is the one senior right now drawing attention from several Division One scouts. 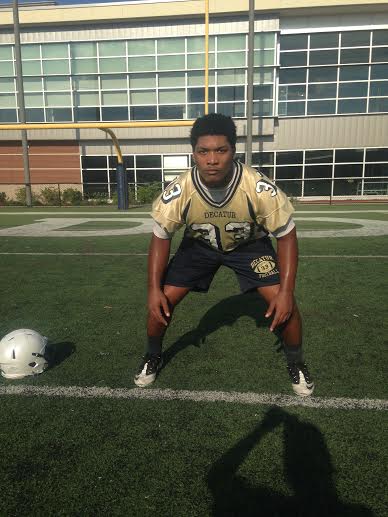 Jackson’s major goal this year is creating “more quality depth.” It’s a given with the modest squad size – by comparison in the opener Woodward will likely dress close to 80 players – many Bulldogs will play both ways. But Jackson’s hoping that at least the defensive and offensive lineman will play only one side of the ball, although that depends largely on as few injuries as possible.

For Jackson, however, who spent 15 years as an assistant before getting a top job, his major chore during the pre-season is cultivating a leadership stable.

“We really have a void in that department,” he said. “That’s a big area for Devonte and our other seniors to improve in. This is a very emotional sport, and we need some leaders who can clean up some attitude, who can kick some [of their teammates’] butt.

“The coaches can’t do it all,” he said. “The kind of leadership we get, that will probably determine how far we go.”

In a weird twist, Decatur’s 10-game schedule includes only four home games, although the Sept. 13 game against Towers is a short plane ride away to the Avondale Stadium. The Bulldogs also play back-to-back 5:30 games at Lakewood Stadium, against Douglass and Therrell respectively.

Decatur played its first game October 13, 1913, when the school occupied the second floor of what’s now Glenwood Elementary. It played one game that year, one in 1914 and two in 1915 or as DHS historian Eddie Fowlkes likes saying, “They played a pretty light schedule back then.”

In October, 1915, a Decatur player named Davis Chambers was killed in a game against Marist, played on what newspaper accounts called the McDonough Field. Today, we have no idea where that field was located. But we do know that after the fatality Decatur didn’t field another football team until 1921, when the school moved to the present campus and the football team began playing on the present location where they’ve remained, counting this season, for 94 consecutive years.

Although there’ve been three separate stadiums on the spot, this is the same location, the same east to west configuration, dating to Oct. 14, 1921, when Decatur beat Kirkwood 13-0. The first lighted high school football game in the state of Georgia was played on this field, Oct. 17, 1930, when Decatur beat Athens 13-0.

Editor’s note: Would you like to see coverage of the entire 2014 Decatur High football season? We are currently looking for sponsors to help us provide coverage of your Decatur Bulldogs. If you’re a business owner and interested in helping us spread the word about Decatur football, contact us at [email protected] or call Jeff Cochran at 404-441-7389