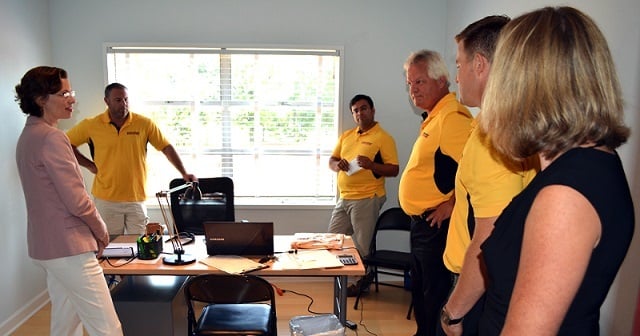 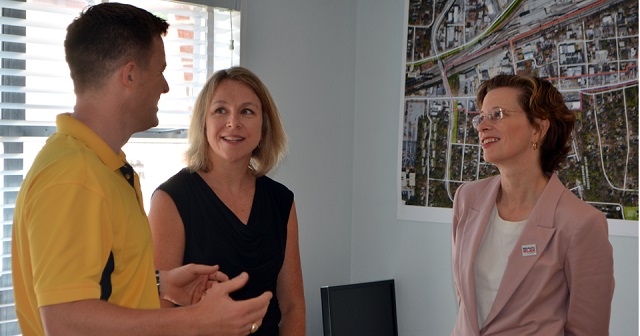 On Friday, a U.S. Senate candidate visited the office of Jeremy and Jennifer Rhett, owners of the CertaPro Painters in Avondale Estates.

Michelle Nunn, the Democratic nominee, visited the business as part of her “Commonsense and Collaboration Tour,” a statewide campaign event. Nunn will face Republican David Perdue in the November general election.

“I have been traveling across the state, highlighting individuals who are coming together to make a difference. It’s the commonsense collaboration and creativity of Georgia’s individuals and organizations, like Jeremy and Jennifer Rhett of CertaPro Painters, that Washington can learn a lot from,” Nunn said in a press release. “I’ve spent the last 25 years working with people from all walks of life who wanted to improve their communities. I have always believed that change starts with individuals. I have learned that we can’t wait for someone else.”

The Rhetts started a nonprofit, Reading is Essential for All People, or REAP. Jeremy Rhett said Nunn was interested in knowing more about the nonprofit, which helps to train public school teachers working with students who have reading disabilities.

“She had a great idea for a funding program,” Rhett said. “She said, ‘You should reach out to those people that care about your mission and get them to sponsor a child who is going to benefit from this training.’ She volunteered a $1,000 to kick start that program for our nonprofit.”

Nunn speaks with employees of CertaPro. Source: Nunn for Senate

He said Nunn was also interested in learning more about what she could do as a senator to help small businesses. Rhett said he started out with a loan from the Small Business Administration. He said he’d like for the program to be “lean and mean” and not as complicated as it currently is.

Rhett said he doesn’t have political candidates in his office much and he’s still not sure who he will vote for.

“I’m still learning a lot about the candidates,” he said. “I don’t ever vote along party lines. I look at the issues.”