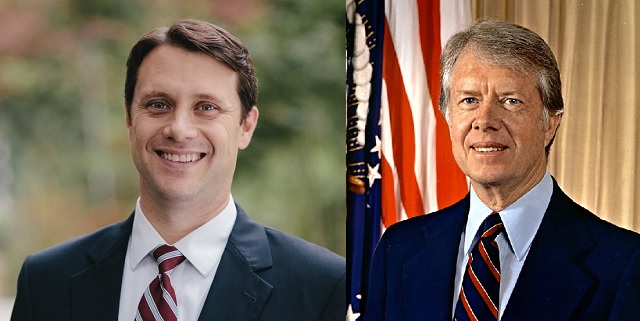 Being the grandson of a U.S. President would presumably be a boon for any candidate, unless the grandfather is a Republican punching bag and the candidate is running for governor of Georgia as a Democrat.

Such is the dilemma of state Sen. Jason Carter, who currently holds a slim lead in the polls against incumbent and ethically-challenged Gov. Nathan Deal. Sen. Carter is the grandson of U.S. President Jimmy Carter, a one-term president and the center of many Glenn Beck conspiracy theories.

The New York Times examined the odd interplay of the two men’s relationship on the campaign trail in an article that appeared in the Sunday edition.

NYT notes that while the elder Carter provides extensive advice on his grandson’s campaign, he’s not always a welcome presence on the campaign trail.

The paper notes that when President Carter offered to attend a campaign event in Albany, Ga., Sen. Carter “politely asked him to stay home.”