The movie’s tagline encourages us to, “Look closer.”

Your neighbor’s comfortable, happy existence could be a front for something much darker.

The technology that allows us to relentlessly document the events around us can also be used to deceive us.

Think about the character of Ricky Fitts, the shy neighbor with his video camera constantly turned on the world looking back at him. Taken at face value, his recordings shown at the beginning of the movie lead us to believe he’s guilty of someone’s murder. It’s only through the act of watching the movie that the audience learns he’s as much a victim as Lester Burnham. When we look closer, we realize our understanding of things rest on our own faulty assumptions.

That movie came out in 1999, well before the rise of social media and YouTube. Now everyone is a Ricky Fitts, shooting videos, taking selfies and publishing them where millions of people can see them.

But are our assumptions today any more refined than the audiences’ when they first saw the opening of “American Beauty” in 1999? Are we savvier consumers of information?

The first news event that comes to mind is the recent death of a toddler inside a hot car on a June day. At first, the decision to arrest the child’s father – Justin Ross Harris – sounded cruel. Why would police officials compound this tragedy by arresting a father that many argued had made an honest mistake?

Sympathizers even created a Change.org petition asking prosecutors to drop the charges.

Then new information began to trickle out.

The prosecutors allege the Harris’ family was in financial distress. They said the sympathetic father, Harris, was leading a double life. They claim he was sending sexually-explicit text messages of himself to an underage girl while his son was dying in the back seat of his SUV. Prosecutors allege that the baby was insured for $27,000 and that Ross Harris instructed family members on how to claim the insurance money.

The Harris family lived a very materially comfortable existence, on the surface. The father had a good job. The items investigators confiscated included a “Dell computer tower, Google Chromecast, MacBook Pro Laptop, Lenovo Think Pad, Apple MacBook, Apple Ipad and Iphone,” according to 11 Alive. The idea that this pudgy, doting father who published cutesy selfies on the internet could conceive of, much less execute, such an evil plan flies in the face of everything outward appearances led us to believe. 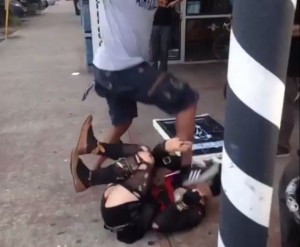 A screenshot from a video depicting an attack on a transgender woman in Atlanta’s Little Five Points community.

The other news item that reminds me of the core message of “American Beauty” involves the filmed attack of a transgender woman in Atlanta’s Little Five Points community.

It first made the news after someone posted videos of the attack on Vine. The video followed an incident in May. Two men were arrested in connection with a video-taped attack on two transgender women.

At first glance, the Little Five video appears to document another vicious attack on a transgender person. The video, which has been taken down, shows the victim in an argument with several men. It ends when a larger man charges the victim and ends when the foot apparently stomps on the victim’s head.

The video raised several obvious questions. Who is this person and are they ok? Who are the men depicted in the video? Who is filming it? And how could something like that occur in broad daylight in Little Five without someone inside one of the stores seeing it or calling the police?

I went out to Little Five on Thursday to gather more information. The people who worked in businesses nearby didn’t see anything out of the ordinary.

The blow to the head itself is partially-hidden behind a giant pole.  Creative Loafing also interviewed the person who shot the video.

According to the CL story:

“He also says the angle at which the video was filmed – a pole obscures part of the victim’s face when she is on the ground – made the kick look worse than it actually was.”

Atlanta Police are treating the video as real, and most media have erred on the side of caution, given the prevalence of violent attacks against transgender people.

The person who shot the video told the GA Voice in an interview that the incident wasn’t about transphobia but was instead a random conflict between one of Little Five’s many street people and some bystanders.

The person who shot the video sounded reluctant to talk to Atlanta Police about it.

“When asked if he was going to speak to the APD about the incident, he said he didn’t want to get too involved but would reach out to them,” the GA Voice story said.

APD Sgt. Greg Lyon said Sunday morning that the person who filmed the video hasn’t come forward and police haven’t been able to locate the victim.

The information that’s available raises more questions than it answers. Our instincts to protect the defenseless against senseless violence might be clouding our ability to question the nature of the video and how it was produced.

Information comes to us at an almost-lighting pace these days. Who wouldn’t believe that Ross Harris felt anything but love toward his son, based solely on the pictures he and his wife published online? Who wouldn’t condemn a vicious attack on a person lying helpless on their back?

In that rush to judgment, we might forget to step back and consider what most of us know but take for granted.

Things sometimes aren’t as they appear.