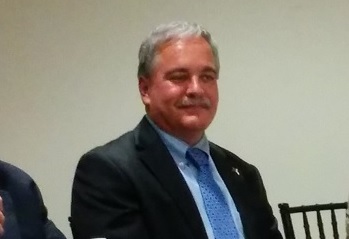 Recent remarks by the Republican candidate for state school superintendent drew a strong reaction during Tuesday’s City Schools of Decatur Board of Education meeting.

BOE member Annie Caiola said during the meeting that she was “sickened” by recent remarks from a candidate, who she did not name. School Board members are generally prohibited from politicking from the dais. After the meeting adjourned, Caiola confirmed she was referring to remarks by Republican Richard Woods, who is running for state school superintendent against Democrat and former Decatur School Board member Valarie Wilson.

Woods’ remarks were first reported by the Marietta Daily Journal in a story about a Cobb County GOP fundraising event. Reportedly, Woods said, ““Come November, again we need to stand together, because we are going to let the Democrats know that they are living on Fantasy Island, OK? They may dust off their copies of their VHS copies of ‘The Color Purple,’ but it isn’t going to happen, all right?”

The movie he referenced was released in 1985 and is based on a book by Alice Walker. Its protagonist is a black woman dealing with racism in rural Georgia in the 1930s.

Woods told the Atlanta Journal Constitution that his remarks were in no way a dig at his opponent, a black woman running as a Democrat in Georgia in 2014. He told the AJC he was just making a joke involving primary colors.

“I used two movie titles to reference the hope of a Democratic comeback – ‘Fantasy Island’ and ‘The Color Purple’ (Georgia becoming a ‘purple’state),” he explained to the AJC. “Both references were made because of the words in their titles, not the content of the movies. In fact, I immediately followed the movie title reference with keeping Georgia ‘Republican red.'”

Caiola was unconvinced, saying that as a voter she was “disappointed, disturbed and offended” by Woods’ words.

“As a board member I can say I hope that people are listening to what the candidates are saying and paying very close attention to this upcoming election, because I heard some things that were very upsetting,” she said.

Wilson wasted no time using the controversy to raise money.

“Georgia is changing,” she said in her letter. “Sadly, the GOP’s Tea Party nominee to take over our schools is warning his friends to beware of a better future for Georgia’s children.”

Wilson added, “My opponent may be afraid of what’s coming to Georgia in November, but I am not.”