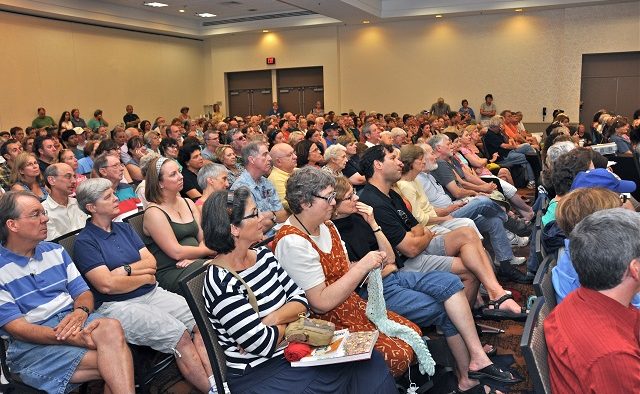 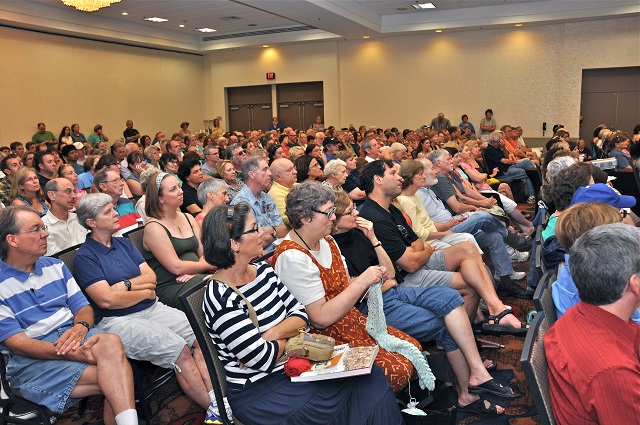 Photo of the 2013 Decatur Book Festival. Photo by: Bill Mahan, provided by DBF

For food lovers, the Healthy and Local track will operate on an outdoor stage under a tent with a full kitchen.

The tent, located at North McDonough and West Trinity near Decatur City Hall, will seat up to 250 people—many more than could fit into the old location for food presentations, Cook’s Warehouse.

“I’m particularly excited about the Healthy and Local Track this year,” said Daren Wang, book festival executive director. “It’s just so Decatur — a mix of food and smart cooking along with social issues and even some hiking/outdoors issues mixed in.”

Some of the speaker/demonstrators will be Marcie Cohen Ferris, author of “The Edible South,” and Martha Ezzard, who will talk about starting a winery in north Georgia.

The other new tracks include:

– The Civil War. These programs are timely, since the 150th anniversary of the great conflict is being observed.

– Romance. Some of the discussions are titled “Where the Husbands Are” and “Your Deepest Desires,” about lesbian love in the Deep South.

– Pat Conroy. The best-selling author of novels such as “The Prince of Tides” has set up four discussions, including an examination of the work of Western North Carolina writer Ron Rash and a talk about literary marriages, including his own to Cassandra King.

– Business and Economics. One of the speakers is Dennis Kimbro, who wrote “The Wealth Choice: Success Secrets of Black Millionaires.”

– Global Voices. Diversity in children’s books and “Love in the Time of Globalization” are two subjects up for discussion.

“I’m really excited about our new Global Voices track,” said Philip Rafshoon, festival programming director. “It brings together a diverse array of issues, cultures, and stories from around the world by authors who are naturalized Americans, and several who are coming from other countries.”

Other new features include the 90 Second Newberry Film Festival Showing, the 2014 Booklogix Writing Contest, The Book As Art exhibit and the Teen Poetry Slam.