CEO May nominates his replacement

CEO May nominates his replacement 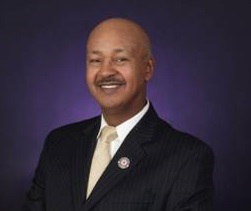 DeKalb County Interim CEO Lee May announced his nomination for his temporary replacement as the County Commission’s District 5 representative.

The press release said that Turner was selected as one of two finalists selected from 20 applicants. The other finalist was Kathryn Rice, president of Building Quality Communities. May interviewed both Turner and Rice, before nominating Turner. The nomination will have to be approved by the DeKalb County Board of Commissioners.

May’s District 5 seat has been vacant for a year, after May replaced CEO Burrell Ellis, who was suspended after he was charged with shaking down contractors for campaign contributions.

“I want to thank the panel for their time and effort throughout this selection process to ensure that District 5 is well-represented on a temporary basis. They recommended two great individuals to choose from,” May said in the press release. “While both are very strong candidates, I believe that George Turner is the most suited for the role.”