Commissioners push back against YMCA deal

Commissioners push back against YMCA deal

DeKalb County Commissioners Kathie Gannon and Jeff Rader are asking the public to “see the bigger picture” before supporting a plan to spend $5 million to purchase the South DeKalb YMCA.

Rader and Gannon have been steadfastly opposed to the purchase. In June, the DeKalb County Board of Commissioners voted 3-2 for the plan, but it needed four advance, according to WABE. Rader abstained from voting in order to prevent a tie, which would’ve been broken by Interim CEO Lee May, who supports the plan. To read the WABE story, click here.

In an email sent to constituents, Gannon said the purchase is on the commission’s Aug. 12 agenda. Gannon and Rader oppose spending bond money on the project. Under the terms of the YMCA deal, the county would buy the property, transfer it to the Development Authority of DeKalb County, and lease it back to the YMCA for $1 a year for 50 years.

The county is hosting tours of the YMCA prior to the Aug. 12 meeting. The tours will be held on Aug. 9 and 16th at 8:30 am, 9:30 am and 10 am. Gannon included a map listing other facilities around the county and in her email suggests the public tour those as well.

Here are Gannon’s arguments against the YMCA deal listed in her email:

Summary of Proposed South DeKalb YMCA Master Agreement
• This agreement is exclusively negotiated with the YMCA, and the like has not been offered to any other organization or governmental partner. The Y brings no money to the table for improving the property. The YMCA will use public money to operate a recreation facility that requires membership and fees to use.

• The private South DeKalb YMCA at 2565 Snapfinger Road is less than three miles from DeKalb’s Browns Mill Recreation and Aquatics Center and less than 3 miles from Exchange Park Recreation Center, together the object of $16.1 million in recent and ongoing Parks Bond developmental investment (Exchange-$7.2 million, Browns Mill-$8.9 million) . The agreement will sink a grand total of over $21 million of Bond improvements within a 3 mile radius.

• DeKalb County will purchase the existing YMCA for $5 million, using $1 million of District 3 and 7 Parks Bond Land Acquisition Funding and $4 million in County Wide Acquisition Funding. The agreement diverts land acquisition funding to development, contrary to the Bond Referendum. The property is appraised at $2.5 million for tax purposes, with the land appraised at $400,000.

• The YMCA will renovate the building to its own plan, and continue to operate the facility as a YMCA, charging a fee schedule of its own choosing, except that special benefits exclusively for residents of three surrounding zip codes shall be provided, including waiver of initiation fees for ten years, registration preference, special programing and financial assistance. Typically the annual membership fees are $648 per individuals and $1,100 for a family.

• The Parks Bond Advisory Committee and the Initiative for a Green DeKalb Advisory Council have written the Interim CEO and Board of Commissioners stating that in their opinion the YMCA purchase does not meet the intent of the 2001, 2006 DeKalb bond issues, nor the 2010 Parks Master Plan.

• The YMCA must maintain and repair the facility, and the County may improve the building, subject to YMCAapproval. DeKalb will continue to operate Browns Mill and Exchange at public expense. 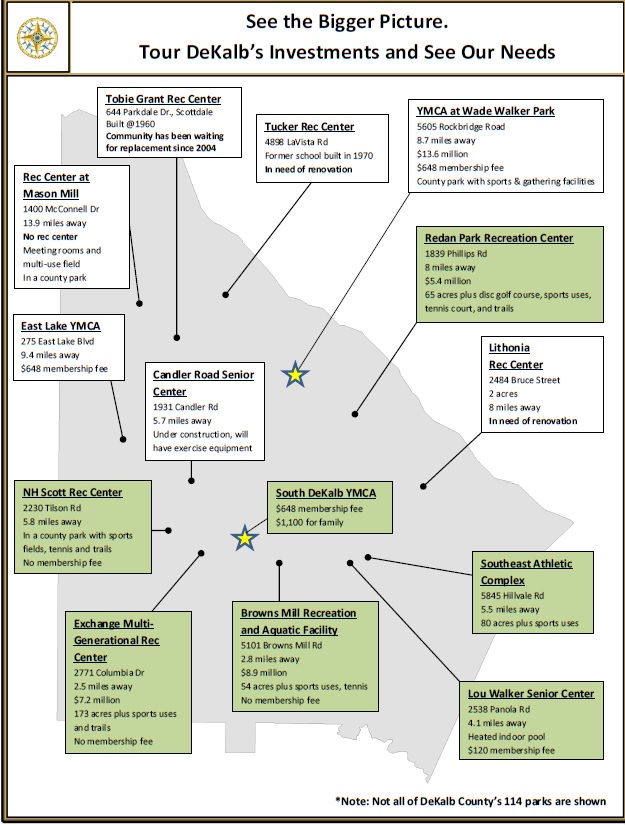