Decatur Police Sgt. Jennifer Ross released preliminary numbers for crimes reported in July and things are pretty much the same.

Here are the stats provided by Sgt. Ross: 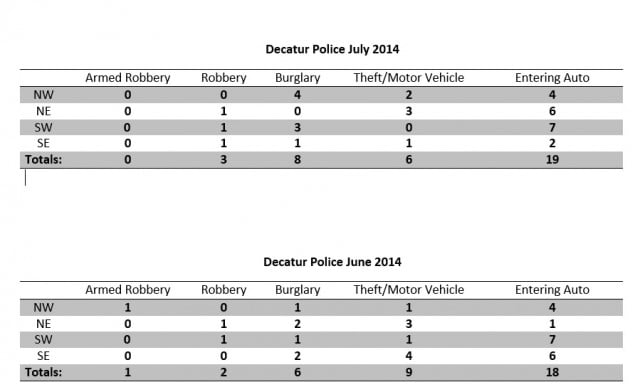 Ross said that two of the three robberies reported in July were related to domestic situations, and one was proven to be unfounded. The other was a robbery of the Family Dollar. Police quickly apprehended that suspect.

She said four of the July burglaries involved commercial locations, including one where someone stole lawn equipment from a shed. There were three residential burglaries and there was nothing taken in two of them.

“We are working leads in the third,” Ross said.

As for car break-ins, Ross said most of the 19 reported in July “were random in every way,” including the location, time frame and method of entry. She said three of the cases occurred during a short time frame during the day around parks, schools, day cares and churches.

“This indicates suspects are in the area waiting to see someone drop off their child, enter a park, etc. or they are trolling those types of locations for vehicles where personal belongings such as purses and laptop bags are often left in vehicles,” Ross said. “Also, one of those cases occurred in May but was not reported until July due to subsequent fraud.”

Ross said the department encourages people to report car break-ins when they happen because if there’s fraud after the fact, your bank will want a police report. It also gives the department a chance to recover evidence and gives officers a clearer picture of what’s going on in which neighborhoods. That way, officers can patrol “hot spots” where crime has increased.