City Schools of Decatur report that their students rocked the ACT tests in 2014, posting the highest average district scores in five years.

“The 2014 ACT scores reflect the highest CSD student participation with a 48 percent increase in test takers since 2010,” Superintendent Phyllis Edwards said via press release. “I am proud that we continue see growth in the number of Decatur High School students taking the ACT every year and that our scores continue to surpass the state and nation.”

CSD also provided this table showing the percentage of its ACT-tested students who are ready for college courses. 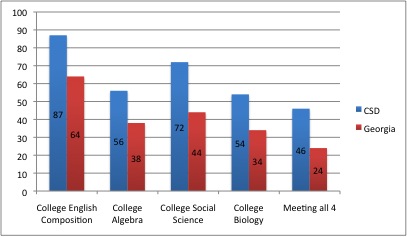