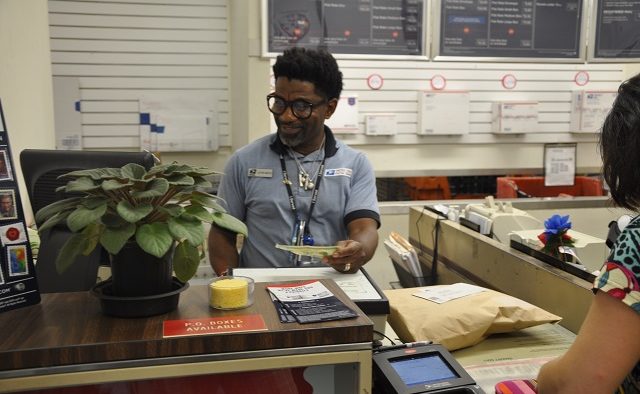 Leon Amos works behind the counter at the Avondale Estates Post Office on Aug. 15. Photo by Dan Whisenhunt
Share 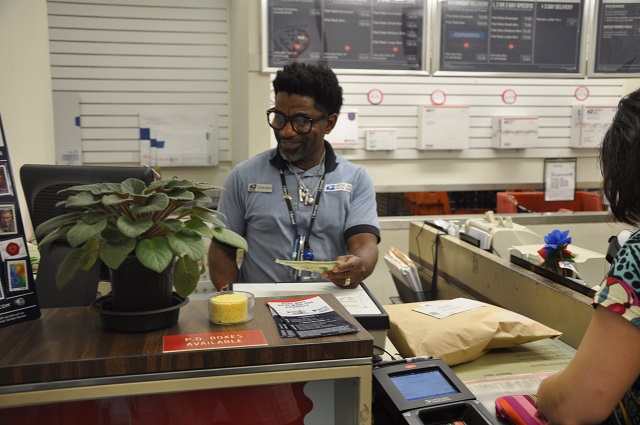 Leon Amos works behind the counter at the Avondale Estates Post Office on Aug. 15. Photo by Dan Whisenhunt

Leon Amos went over his schedule with Rose Wiekert, flipping a page on the calendar behind the counter of the Avondale Estates post office.

Next month, Amos will be leaving Avondale Estates for the post office Puerto Rico. He’s been a fixture here since 2000, winning over customers with his conversational tone and laid-back style. He wears thick, plastic round-rimmed glasses and trinkets dangle from around his neck.

Wiekert is one of his regular customers. She’s also from Puerto Rico. Wiekert hates to seem go, but knows he’ll enjoy his new job.

“He’s just a nice person, very friendly,” she said. “Very humorous. I like him a lot.”

That’s the consensus view around Avondale, where customers have been loyal to the post office and fond of Amos.

Amos hails from Chicago and moved to the Atlanta area in 1990. While he’s been employed with the post office for the last 24 years, until now he has only been part time. He also plays piano and has supplemented his income with the postal service by playing at local churches.

He has no family in Puerto Rico. The only thing waiting for him there is an opportunity, and maybe a nice place to retire. Amos has sold most of the belongings he’s accumulated over the last few years, including a grand piano.

“That was a hard thing,” Amos said. “I got home and it was gone. That kind of said, ‘Well, you’re leaving. You’re leaving now.'”

He described the move as, “a leap of faith.”

“I’m not old enough to retire yet,” Amos said.  “I don’t know what’s going to happen. It’s a nice window to a whole lot of other parts of the world.” 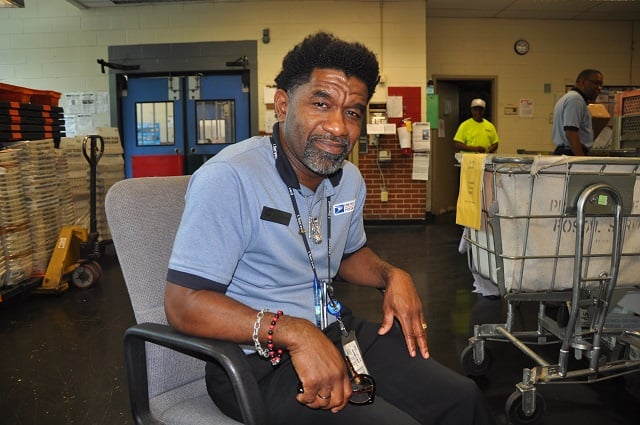 His 14 years in Avondale have provided a window to changes in the city. The small Southern town with its odd Tudor style architecture has gotten busier lately as new businesses have moved in. Amos said he’s seen residents grapple with the developments happening around them.

“It has changed, but the thing about that is, it’s for the good for the most part, but a lot of the old things about the city that the citizens love so much, they don’t want to lose that,” he said. “The older citizens here, been coming here before I even got here, they love the city the way it is. They don’t want Avondale to become the new Decatur.”

Joe Loisel, another customer, said he’s appreciated the time he’s been able to spend with Amos while he worked in Avondale.

“He’s awesome,” Loisel said. “We’ve had a lot of fun. We were always joking every time I came in to mail something. He’s just a real friendly guy.”

Amos has made lots of friends in Avondale, and he’s lived for the last 12 years on the city’s border with Scottdale. He remembers when he first arrived in the city he was a new face replacing another popular sales associate.

She retired and many Avondale customers were sorry to see her go.

“All I can do is just be who I was and that’s all I can do,” Amos said. “I gave them the service that I would expect, and that’s all you can expect from a person. Once I did that, that’s all they wanted from me. Once I figured that out, the rest was easy. They just kept coming back.”

Avondale isn’t the only thing that’s changed over the decade. The Postal Service itself has changed as more people communicate electronically. Amos said he’s noticed some drop off in the volume of mail coming through the door, but not as much as you might expect. As it turns out, people in Avondale like writing letters.

“Avondale Estates is very, very exclusive and they’re a very different customer,” Amos said. “Although things have evolved and changed so much because of computers, they still like to write. They still come and buy stamps, and they buy them in huge amounts. I think that has a lot to do with why we’re still here.”

Amos said there’s another thing about the Avondale Estates Post Office that he finds interesting.

“Most of our customers come from Decatur,” he said.  “Did you know that? They come and we hear every day at least three or four times a day, ‘I live in Decatur, but I like this post office because you all are so nice.’ That’s what they say.”

He said the Decatur customers also appreciate not having to stand in a long line. It’s one of the many perks of visiting the Avondale Estates post office, along with the nice chit chat.

“I love Avondale,” Amos said. “It’s been good to me. It’s been a treat. The customers have kept me here as long as I’ve been here.”

But it’s almost time to go. His last day is Sept. 5. There’s one customer, a 4-year-old girl, who stops by a few times a week just to see Amos. When her mom found out she was leaving, she cried because she didn’t know how she’d break it to her daughter. Amos said the little girl’s mom told him, “You’re one of her best friends.”

Whenever the little girl stops by, she often wants a hug from Amos. On her most recent visit, she asked for her usual goodbye, but something was different, Amos said.

“She held on to me … she held on so long like she knew I was leaving,” Amos said. “That was just about to kill me.”