A picture of Hosea Williams, left, and Franklin Morris, right, that hangs in the Morris' Restaurant and Lounge in Kirkwood. File photo by Dan Whisenhunt
Share 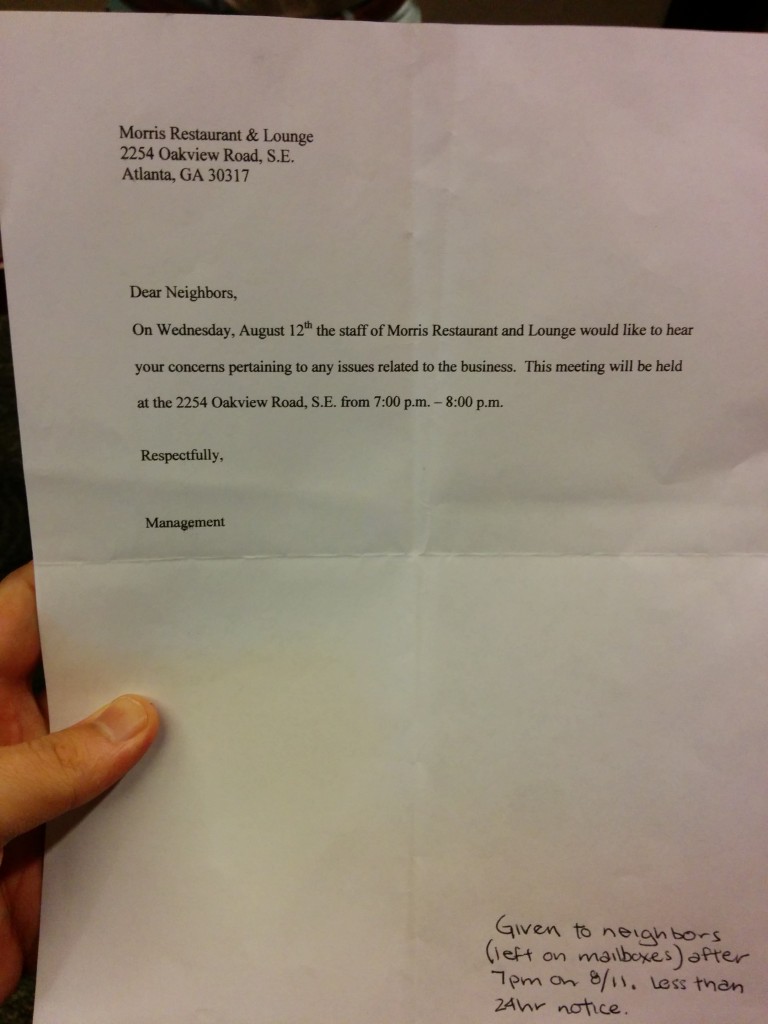 A letter the owners Morris Restaurant and Lounge left on the mailboxes of neighbors. Photo by Dan Whisenhunt

There may be a breakthrough in the dispute between Kirkwood residents and a local lounge.

On Thursday, Aug. 14, Franklin Morris, the owner of Morris Restaurant and Lounge, appeared again before Municipal Judge Herman Sloan regarding noise violations at the club.

He had apparently recovered from his encounter with a lawnmower that fell on him prior to his last court date on Aug. 7, causing him to miss court.  The judge sentenced Morris to a $500 fine and six months probation for that charge, stemming from a noise complaint lodged in April. Morris received a subsequent violation in July, and the judge suspended that sentence.

Morris put a note on the mailboxes of his neighbors on Aug. 11 and asked for a meeting on Aug. 12. Morris told the judge the meeting was productive.

“I met with some neighbors and a representative from the mayor’s office and the zone commander,” Morris said. “We’re coming up with some things we’re going to do to coexist.”

Morris Restaurant is a historically black-owned business that has been in business on Oakview Road since the 1960′s. The sons have been running the business since their father, Franklin Sr., passed. The family says their newer neighbors are trying to run them out of the neighborhood. The neighbors say they just want the club to rein in some of the rowdy behavior surrounding it.

The judge accepted the terms, asking Morris to come back to court on Sept. 25 so the judge could check in on his relationship with his neighbors. He warned Morris not to run afoul of the city’s noise ordinances during his probation or he would face harsher punishment.

After the hearing, Morris had no comment. The neighbors were optimistic.

Derek Lawler, one of the neighbors, said Morris asked for the neighbors to call the Lounge before calling the police if the music is too loud. Lawler and the other neighbors said that was something that had been agreed to before, but they’re willing to give it another shot.

After the hearing, Lawler walked up to Morris and shook his hand.