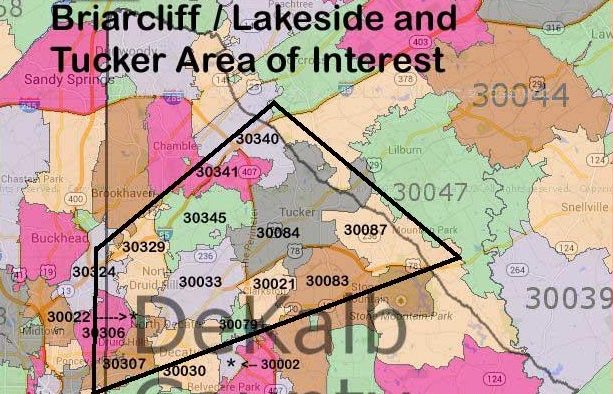 One of the communities in North DeKalb looking to form new cities have released a map showing the areas under discussion, and those areas are also being targeted by the city of Decatur for possible annexation.

Decatur recently awarded a $25,000 contract to the Sizemore Group for annexation master planning services. The city of Decatur is looking to expand its boundaries from 4.2 square miles to 5.2 square miles, adding areas that include Suburban Plaza, the Kroger shopping center and Patel Plaza. It would also add between 4,000 and 5,000 people to Decatur’s population, currently about 20,000 residents.

On Aug. 24, the City of Briarcliff Initiative Inc. released its “Map of Area of Interest” of the places that the proposed cities of Briarcliff/Lakeside and Tucker are eyeing for a potential new city. That area of interest shows overlap with Decatur’s annexation goals in North Decatur.

“Almost all of the previous maps that have been made public have only included a narrow band around their proposed borders,” the city of Briarcliff Initiative’s Amy Parker wrote. “We hope that this map will put the area under discussion into a more visible context for ongoing discussion.”

After this story was published, Mary Kay Woodworth with LakesideYES sent an email saying, “I want to make it very clear that Amy Parker from (City of Briarcliff Initiative) does not speak for LakesideYES, and did not consult with us regarding the map that is published today.”

Briarcliff and Lakeside recently decided to begin working together to create a new – and as yet, unnamed – city.

Here is the map in question posted by the City of Briarcliff Initiative: 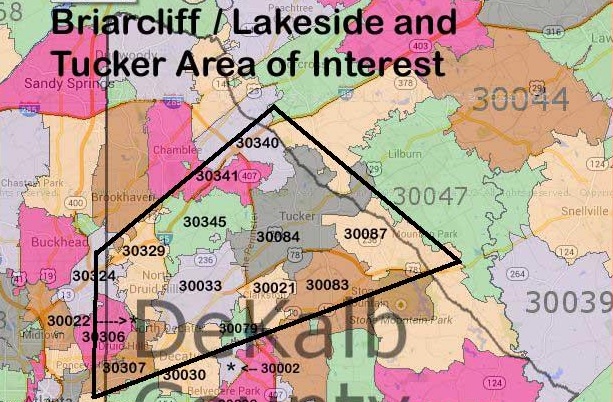