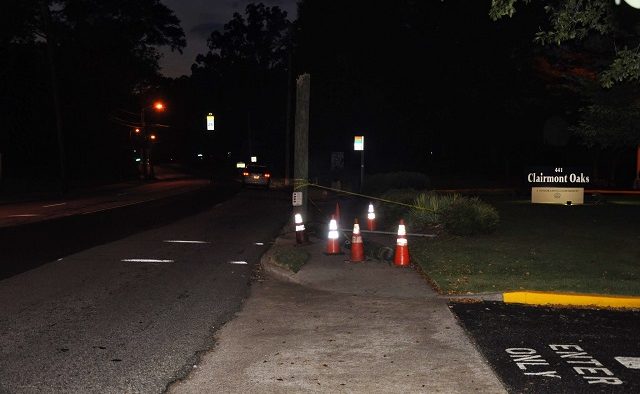 This is what's left of a pole along Clairemont Avenue in Decatur, Ga. after a Coca Cola truck ran into it. Photo by Dan Whisenhunt
Share 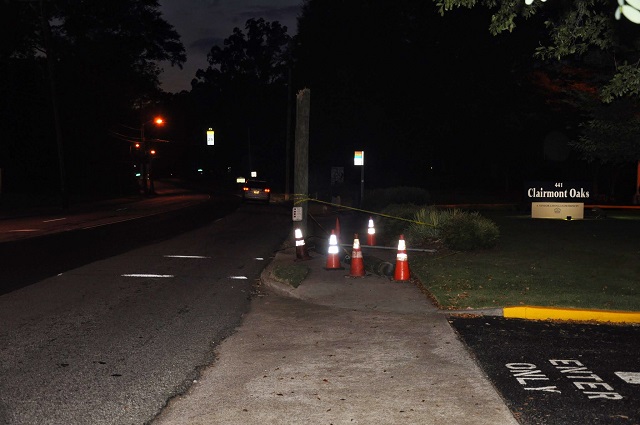 This is what’s left of a pole along Clairemont Avenue in Decatur, Ga. after a Coca Cola truck ran into it. Photo by Dan Whisenhunt

An early-afternoon accident on Clairemont Avenue in front of Decatur First Baptist Church has residents living nearby asking for safety improvements.

The accident occurred around 2:30 pm, right before school let out on the first day of classes after summer break. Ellen Miller, Administrator with Clairmont Oaks senior living community, said a Coca Cola delivery truck clipped the pole at the crosswalk connecting the community to the church. It cut the pole in half and the other half hit another car on Clairemont Avenue.

No one was injured, but Miller stopped by the Decatur City Commission meeting on Aug. 4 to ask if the city could do something about that crosswalk. She said a similar accident occurred within the last 18 months.

“There are speeders through the intersection and the timing of the crosswalk itself is 19 seconds, which is not adequate time to allow seniors to cross,” Miller said.

She said better signal timing would help. She said the city could also do more to alert drivers that there’s a crosswalk and signal there, like putting more police presence in the area.

“We feel that the drivers are coming from both directions, north and south, are not aware that crosswalk is there,” Miller said. “There are so many red light runners.”

She said a resident was killed in the crosswalk sometime in the mid-1990s.

Mayor Jim Baskett asked Miller to leave her contact information with the commission.

“We’ll have our engineers take a look,” he said.