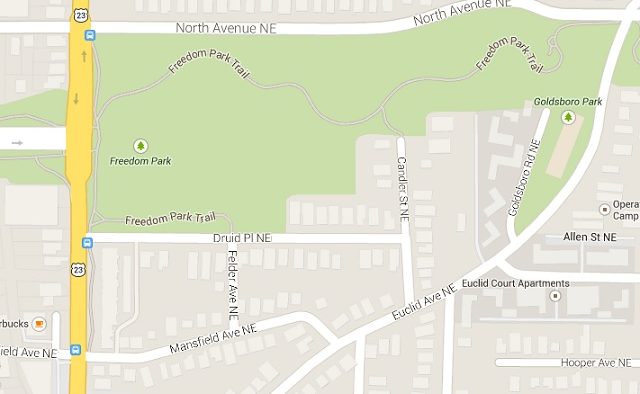 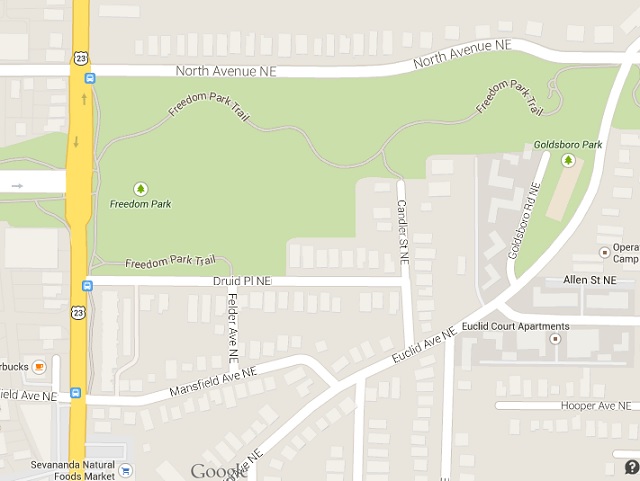 A runner on the Freedom Park Trail reports being attacked by a man who jumped out of the wooded area along the path.

Atlanta Police said the attack occurred on Aug. 11, near the intersection of North and Euclid avenues. The runner was headed toward Moreland Avenue, police said.

While I was running this morning at ~ 10:30 AM on the Freedom Path a man jumped out of the woods and tried to grab me. This incident occurred close to the North and Euclid intersection — I was running toward Moreland on the Path from that intersection and had just crested the hill where the new statue was just installed. He was a white male in his 50s, approximately 5’9″ – 5’10″, thin, ash-blond to gray hair, blue eyes, wearing a gray t-shirt and blue jeans. He appeared well kempt with clean clothes and fair skin that was not weathered. He did not appear to be intoxicated. He came out of the woods and got very very close to me. I turned around and yelled at him (“hey, hey, what are you doing?!”). He reached for me and I then put my hands up in defensive stance, protecting my face. I never saw any weapon and he backed off really quickly once I was yelling loudly. He never did say anything to me. I had nothing with me for him to try to take, so I don’t think this was a robbery attempt.

The victim said she alerted the Atlanta Police Department and officers are actively patrolling the trail, but haven’t found anyone yet. The report was posted Aug. 12 on the Lake Claire Neighbors website.

Atlanta Police released a preliminary report that said the victim told them, “the male did not appear to be homeless or unkempt, but rather clean cut. PathForce units canvassed the area where the incident occurred but no sign of the suspect. There were no injuries.”

The story follows a report of an incident on the Silver Comet Trail in Paulding County that occurred last month. In that incident, a woman was attacked and beaten by a “white male with dark hair.”